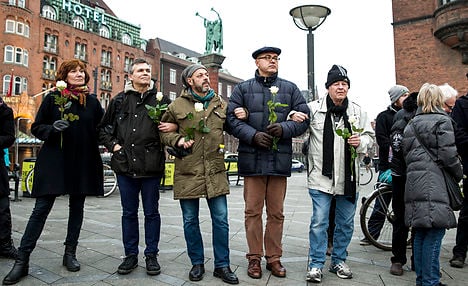 Around 300 people attended a similar vigil in Copenhagen last month. Photo: Nikolai Linares/Scanpix
Copenhagen resident Niddal El-Jabri first approached police officials for permission to hold a show of solidarity for the Jewish community in the week after the twin shootings that left 37-year-old Jewish security guard Dan Uzan and 55-year-old filmmaker Finn Nørgaard dead and six police officers injured.
At that time, Copenhagen Police rejected the request out of security concerns. Although El-Jabri said he was disappointed by the decision, he expressed full faith in the judgement of the police and said he would keep pursuing his plan.
That persistence has now been rewarded. Police have given the okay for El-Jabri to hold a peace ring around the synagogue on Krystalgade on Saturday.
“It is wonderful. It is a big personal wish of mine to send the signal that Jews should of course not be haunted by fear and angst,” El-Jabri told public broadcaster DR.
“In Denmark, Jews shouldn't have to walk around being scared. With the police approval, there will now be an opportunity for those who share that opinion to come and show it with their presence there [at the synagogue, ed.],” he added.
Although El-Jabri said he was happy that police have now given their nod of approval, he fears that the turnout at Saturday’s event won’t be what it could have been if it had been held earlier.
"We will have to do some extra legwork," he told DR.
A police spokesman told DR that although he wouldn't comment on the overall security situation at the mosque, police have determined that the peace ring "will not give big problems".
A separate Danish Muslim group held a peace vigil in Copenhagen’s City Hall Square on February 27th that was attended by an estimated 300 people.
Similar events in Oslo and Stockholm have also sought to minimize tensions between local Muslim and Jewish communities in the aftermath of the Copenhagen attacks.
Police have identified the gunman in the February 14-15 shootings as 22-year-old Omar El-Hussein, a Danish man of Palestinian origin who may have been radicalized by Islamists while in prison. El-Hussein was shot dead by police following the shootings. Subsequent investigations have led to three additional men being charged with assisting the gunman.
Saturday's peace ring at the synagogue on Krystalgade will take place at 2pm.