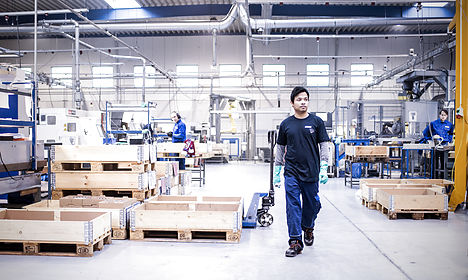 Just one out of four refugees found work in Denmark after a decade. Photo: Sophia Juliane Lydolph/Scanpix
A decade’s worth of efforts to integrate refugees into the Danish labour market have failed, a new analysis from the Confederation of Danish Employers (Dansk Arbejdsgiverforening – DA) shows.
Berlingske newspaper crunched the numbers from a DA investigation and found that just one out of every four refugees who came to Denmark between 2000-2003 was employed ten years later.
The head of DA said the Danish government has “truly failed” in its efforts to get refugees working.
“It is catastrophic that we are so bad at integrating refugees into the Danish job market. That is not acceptable for our refugees, and as a society we simply cannot afford to let this group be taken care of by public benefits,” Jørn Neergaard Larsen told Berlingske.
Government officials acknowledged the problem, with Employment Minister Henrik Dam Kristensen calling the findings “deeply frightening” and Economy Minister Morten Østergaard saying the figures were “an admission of failure”.
DA’s Larsen placed the lion’s share of blame on municipalities that aren’t good enough at helping refugees into the job market. He told Berlingske that without the local authorities’ guiding hand, refugees too often end up on public benefits instead of in a job.
“It’s deeply troubling that we have the world’s most lucrative cash welfare system. If we made a larger distance between the welfare benefits and low-paying jobs, it would of course be easier for the municipalities to convince the refugees that having a job is better than being an outsider,” he said.
Andreas Kamm, the general secretary of the Danish Refugee Council, agreed that not enough has been done to integrate refugees properly into Danish society and the national labour market.
“No one comes here with the idea that they won’t have to work. They are used to fighting for their very existence, also when they are on the run,” Kamm told Ritzau.
Kamm said that the refugees need more help making sense of Denmark’s complicated and generous welfare system.
DA’s investigation looked into how many of the 7,700 refugees who came to Denmark between 2000-2003 were employed between 2010-2013.
The figures come at a time when more and more asylum seekers are flocking to Denmark. The 14,815 people who sought asylum in Denmark in 2014 was nearly double the number from the year before and an almost fourfold increase from 2009.
Those numbers fell drastically in January due to the implementation of new restrictions aimed at both Syrians and Eritreans.