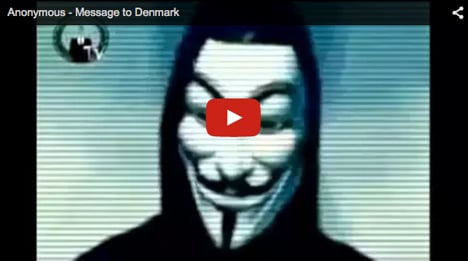 Screenshot: Anonymous Denmark/YouTube
A video message purporting to be from the Danish branch of the internet collective Anonymous was uploaded to YouTube this week in response to last month’s twin terror attacks in Copenhagen and the government’s response to them.
In the video, the speaker stresses that Danes should not let a terror attack frighten them into giving up their rights as the government proposes new anti-terror measures.
“These terrorists seek to spread fear, and it seems they have succeeded,” the message says.
“Are you frightened? I think some of you might be, but do not let the attack on Copenhagen be a victory for them, let it be an opportunity for you. You Danes now have a once in a lifetime chance to prove that you are not scared, and you will not bow down,” it says.
The speaker then alleges that the Danish government is attempting to use fear “to restrict the rights of their citizens” and suggests that the United States' offers of help in the aftermath of both the France and Denmark attacks are "a clear call of the US government wanting to extend their power".
The video concludes by saying: "Anonymous have your back Denmark, and we will not let this attack go unpunished", referring to the collective's campaign to disable the online accounts used by supporters of the terror group Isis.
Story continues below.
The Anonymous message is not the first to criticize the government’s response to the February 14-15 shootings, in which Omar El-Hussein – a Danish-born man of Palestinian origin was later shot and killed by police – fired 28 bullets and killed one at a Copenhagen cultural centre hosting a seminar on free speech and Islam before opening fire at a synagogue and killing an unarmed Jewish security guard.
The government proposed 12 anti-terror initiatives in the days after the attack. One of the proposals would give the Danish Defence Intelligence Service (Forsvarets Efterretningstjeneste – FE) the authority to carry out surveillance abroad without a court order. Critics say this would give FE even broader powers than the US intelligence agency NSA.
Others have argued that Danish “politicians are further dismantling the right to privacy” and in term restricting the very free speech they say they want to defend.