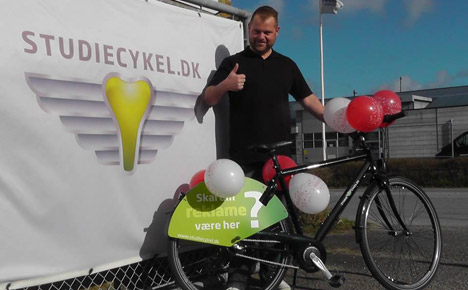 How did you come up with this business idea?
For a long time, I wanted to start my own business. I actually had around 20 different ideas. At the time, I felt like Studiecykel.dk was one with the most potential because of its newsworthiness and because of the social responsibility associated with sustainability and Denmark’s green profile, with an aim of helping Danish students and then also students in Third World countries by shipping these bikes to Sri Lanka after being used for four years in Denmark.
What were the initial challenges? How did you overcome them?
The biggest initial challenge was, by far, financing the project. It actually happened more than once that I put away my idea because I could not get the capital I needed. Somehow I kept going and believed that my idea would become a reality. At last, I found a person who could see the potential and loaned me the money I needed to start it. For this, I am very grateful.
Now I have private investors in my business, which also led to a name change (BikeMedia ApS) and four distinct concepts – all dealing with marketing on bicycles. This happened in the summer of 2014. So, it is still quite new. I learned the hard way to believe and keep working very hard. When you get an established business and investors, suddenly everything becomes a bit easier. When you get the first person to believe in you, others will follow.
How has the journey been so far?
The journey has been very long and very rough. In the beginning, I was sure that my product was going to pretty much sell itself because I really thought it was a good concept. But that was not at all the reality. It took me a lot of long nights, meetings, presentations, etc. before I could feel this was going somewhere. The day I closed the deal that had us represented in the four biggest cities in Denmark was a very important milestone. I had been working so hard to accomplish precisely that! Another very important thing for my company was when I got private investors onboard and finally assembled the concepts in one overall company and BikeMedia ApS was founded.
How has becoming an entrepreneur changed you, personally?
I do not really think starting my own business have had a big impact on my personality. I have that entrepreneur mindset and as far as I recall, I always wanted to become one and I knew that someday I would have my own business. For me, it is not about the money but rather knowing that the business is mine, that I created it and contributed to something new. I might even be bold enough to call it innovation.
Any other personal reflections and/or messages to budding entrepreneurs?
The number one thing that is very important to succeed is to keep going and believe in yourself and your project even though it's most likely that around 90 percent of others do not. You have to find a way to overcome the days when you just feel like giving up and you have to be ready to work hard – every single day.
Are you an entrepreneur in Denmark? Get in touch and we might tell your story.