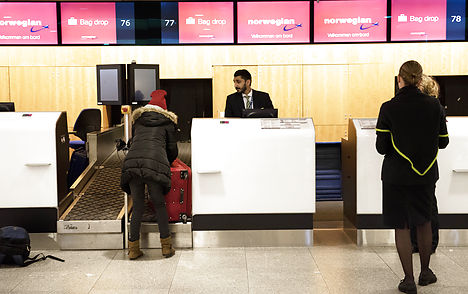 Norwegian cancelled 22 Danish flights Thursday. Photo: Erik Refner/Scanpix
As of Thursday morning, 22 flights at Copenhagen Airport – 10 arrivals and 12 departures – had been cancelled due to the Norwegian pilots’ strike. Flights between Copenhagen and Aalborg, Oslo and Stockholm are the most affected.
Some 650 Norwegian pilots, 100 of them Danish, are striking over concerns that their employer, the Norwegian subsidiary Norwegian Air Norway (NAN) will go bust, leaving the pilots with worse contracts under a new structure.
The striking pilots are demanding that they be hired directly by Norwegian Air Shuttle, but Norwegian chief executive Bjørn Kjos has rejected that option.
For now, Norwegian has brought in the operator Small Planet Airlines, a budget carrier based in Lithuania and Poland, for long-range flights.
The company said that it hoped that European services operating outside of Scandinavia would run as normal and said that routes between Scandinavia and the USA and Scandinavia and Thailand would remain unaffected.
On Wednesday night, Kjos warned that the pilot strike which grounded his entire Scandinavian fleet on Wednesday could only continue for a matter of weeks before putting the survival of the company at risk.
“There are countless examples of unions striking companies into bankruptcy,” he warned, as he gave his first press conference since the company’s pilots called a strike on Saturday, adding that company could “not afford to take losses indefinitely.”
He estimated that the company had the financial firepower to withstand the strike at least into next week.
“We'll probably survive next week too,” he said. “But it will hammer the company, and it will put it back and maybe lead to some routes being shelved.”
Kjos said that the fact that around 35,000 passengers had already been affected by the strike was “extremely tragic”, adding that he did not mind upsetting unions by hiring new planes to replace his own grounded fleet if it meant fewer flights being cancelled.
He said that the company could simply not afford to grant pilots the collective employment agreement they are demanding.
Passengers travelling on Thursday were advised to check online before heading to the airport.
A Danish labour union representing airline security personnel and other airline workers warned Thursday that it would carry out a sympathy strike if a solution to the Norwegian conflict is not found.
The union, Serviceforbundet, approved a sympathy strike at a meeting Thursday morning and said its employees would walk off the job in 14 days if the Norwegian strike is still underway. A Serviceforbundet spokesman told TV2 that it was very rare for a Danish union to stage a sympathy strike with a conflict from abroad.