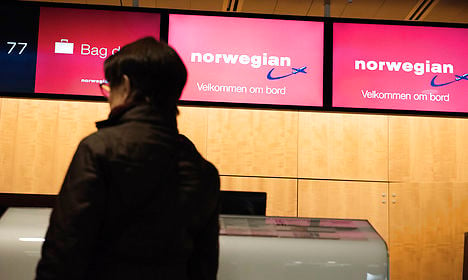 All Norwegian flights within Scandinavia have been cancelled for two days. Photo: Erik Refner/Scanpix

After an extra board meeting Norwegian said it has created three new subsidiaries for its pilots in Scandinavia. The collective agreement will apply in the new firms, including the right to strike, said the airline.

The move, however, did nothing to end the conflict and late on Thursday the airline announced that nearly all flights within Scandinavia would remain grounded on Friday.

“Enough is enough. More than 100,000 travellers have been affected by the pilot strike so far. Norwegian Air Norway (NAN) management has been given full power by management of the mother company to rescue the organization from this ongoing crisis,” said the airline in a press release.

The unexpected news comes on the sixth day of industrial action. Many questions remained on Thursday afternoon, but Norwegian said the move would decrease the risk of financial troubles for its subsidiary NAN.
See also: Additional Norwegian sympathy strike may hit Denmark
Pilots employed by NAN want to maintain tight organizational links with the parent company in the hope of safeguarding their jobs and to standardize salary conditions for all pilots employed in the various Scandinavian subsidiaries.
Norwegian, which last year suffered its first loss in eight years, is looking to reduce the costs and benefits for pilots, and increase job flexibility.
All 700 pilots employed by NAN – including 100 Danish pilots – are on strike and 800 cabin staff have been sent home without pay in a Norwegian-imposed lockout.
Earlier on Thursday, Norwegian gave pilots’ unions NPU and Parat until 3pm to begin negotiations – but the unions did not show up.
Hans Erik Skjaeggerud, chairman of Parad, likened the deadline to a gun to the head.
“We recognize this and our members are used to it. We negotiated last night and have agreed to some changes concerning pensions and insurance. But the company gives nothing back,” he told Norwegian broadcaster TV2.
But Norwegian CEO Bjorn Kjos told Norway’s news agency NTB: “They have been given the opportunity to negotiate even after the deadline. This is the opposite of a threat.”
More than 100,000 travellers have been hit by the strike. As good as all domestic flights in Sweden, Norway and Denmark, as well as flights within Scandinavia, have been cancelled for two days.
Also on Thursday, a Danish labour union representing airline security workers and other airline personnel warned it will carry out a sympathy strike in 14 days if the Norwegian conflict is still underway.