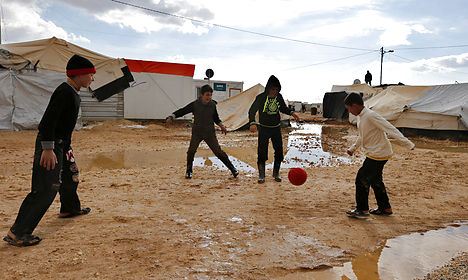 Syrian refugee children play in the Al Zaatari refugee camp in Jordan last month. Photo: Muhammad Hamed/Reuters/Scanpix
The number of people applying for asylum in Denmark has plunged after the country tightened its immigration laws last year to stem the influx of Syrian refugees, data released Wednesday showed.
In January, 626 people — around half of them from Syria — applied for asylum compared with 3,150 in September, according to the Danish Immigration Service.
The government said in September it would introduce a temporary, one-year residence permit for asylum seekers fleeing civil wars such as the Syrian conflict.
The new permit, which came into force this year, can be extended for another two years and does not allow family reunifications to be granted during the first year.
See also: UN wants Denmark to drop refugee restrictions
Denmark also introduced measures to make it harder for asylum seekers from Eritrea to come to Denmark. Due to those efforts, just three Eritreans sought asylum in Denmark in January, down from a peak of 510 in July. The restrictions on Eritreans were brought about as a result of a highly-controversial 'fact-finding report' that was roundly criticized by the report's one named source and other experts on Eritrea.
"I think one of the most crucial factors for how many people apply is the length of the asylum and the conditions for family reunification," the ruling Social Democratic party's spokesman on integration issues, Ole Hækkerup, told Ritzau. "This is where the government has made an effort."
Denmark already had some of Europe's toughest immigration laws after governments between 2001 and 2011 relied on the support of the anti-immigrant Danish People's Party in parliament, in exchange for which the party was allowed to help shape migration policies.
The number of asylum applications also fell in neighbouring Sweden in January but by a much smaller percentage, down to 4,894 from 9,976 in September, according to the Swedish Migration Board.
Sweden became the first European country in 2013 to grant automatic residency to Syrian refugees and has since seen asylum requests rise to record levels, expected to reach about 90,000 in 2015.
The country receives the highest number of refugees per capita in the EU and is second only to Germany as a destination for Syrians fleeing the Middle Eastern country's civil war.
The number of migrants entering the EU nearly tripled in 2014 to 280,000 from to just over 100,000 the previous year, mainly due to the conflict in Syria, the bloc's border agency said on Wednesday.