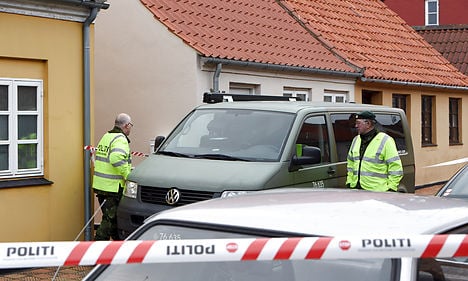 Police on the scene in Rønne. Photo: Morten Brandborg/Scanpix
Bornholm Police said that it received a report of shots fired shortly before 5am Tuesday at a residence in the town of Rønne. When police arrived at the scene, they found a man and a woman shot dead. An additional man was severely wounded by gunfire.
Police believe that the dead man likely killed the woman before turning the gun on himself and committing suicide.
The injured man has been taken to hospital.
“It was the severely injured man, aged 68, who reported the shooting incident. He has been taken to Bornholm Hospital, where is condition is fairly stable according to the doctors,” Bornholm Police spokesman Peter Højgaard Jørgensen told Ekstra Bladet.
Police say that a shotgun found at the scene is the likely murder weapon.
Officers are working from the theory that there was a some sort of dispute between the three individuals.
“We can’t rule out that there is a fourth person involved but as of now it looks like it was a clash between these three people,” Jørgensen told Berlingske.
Rønne is the largest town on Bornholm, with a population of around 14,000.