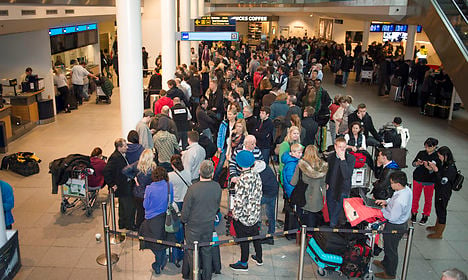 The SAS strike has grounded scores of flights since Friday. Photo: Simon Skipper/Scanpix
Shortly before a 12pm deadline to return to work or lose their jobs, SAS cabin personnel called off their strike.
Jakob Esposito, the spokesman for the striking workers, said that the employees would return to work and SAS flights would resume operations shortly after noon on Monday.
Although the cabin personnel will return to work, Esposito warned that the conflict is far from over.
“Even if the employees go back to work at 12pm, I am quite convinced that this won’t stop here. Next, we can carry out a legal conflict in order to get a new bargaining agreement with Cimber, and we will have [the support of] a majority of employees,” he told public broadcaster DR.
While the end of the SAS strike is good news for frustrated travels, their relief may be short-lived.
SAS rival Norwegian is also experiencing dissent from workers this week.
Around 70 of its staff in Norway went on strike on Saturday, after more than three months of fruitless negotiations over pay and conditions.
If Norwegian fails to reach a solution with its pilots, a sympathy strike could end up involving as many as 700 pilots across Sweden, Norway and Denmark.
For more on the potential Norwegian sympathy strike, see The Local Sweden.
As the SAS work stoppage entered its fourth day Monday, the airline told workers that they would be fired if they did not call off what the airline has characterized as an illegal strike.
“The illegal work stoppage has negative societal and economic consequences. Therefore it is necessary that SAS, as a responsible company, takes further steps to normalize operations for the sake of our customers and employees,” a SAS press release read.
On Sunday, the Danish Labour Court (Arbejdsretten) ruled that the roughly 140 striking personnel represented by the Cabin Attendants Union (CAU) needed to return to work. CAU defied the order and SAS cancelled 40 Sunday flights.
As of 8am Monday, 51 additional flights had been cancelled in and out of Copenhagen Airport. Travellers are advised to check with SAS on the status of their flights:

The @SAS work stoppage has ended but delays & cancellations will occur throughout the day. See CPH.dk or contact your airline for more info.

The cabin personnel is striking over SAS’s plans to move them over to the collective bargaining agreement of Cimber airlines, which SAS purchased in December. Cimber’s bargaining agreement is less generous than that of SAS.
In its press release, SAS said that striking workers are threatening fellow employees who have remained on the job.

TRAVEL NEWS
SAS pilots in Norway, Sweden and Denmark to strike after talks break down