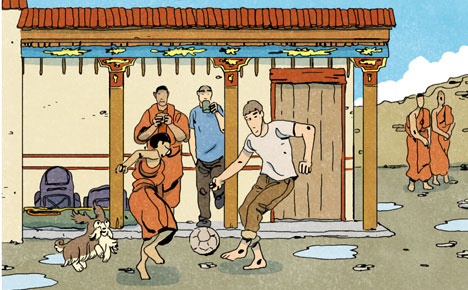 Nybrandt has told his story in the form of a graphic novel. Image: Submitted
Michael Magnus Nybrandt has a unique story, and he’s chosen a unique way to tell it.
In the late 90s, the Copenhagen native was in search of a “new dimension” to his life. So he and a buddy decided to go on a tandem bike adventure in Tibet. That decision would lead to Nybrandt’s improbable place in international sports history.
“Meeting the friendly Tibetan people changed the path of my life,” Nybrandt told The Local.
It all started with a football match. While on his bike journey, Nybrandt and his friend took shelter in a Tibetan monastery and ended up staying there for a few days.
“It just so happened that the monks liked football and we ended up playing in the monastery court. The same night I dreamt that I was the coach of the Tibetan national football team – a dream that haunted me until I realized that Tibet didn't even have a national team,” Nybrandt said.
Not only did Tibet have no team, Nybrandt – despite having some semi-pro playing experience – had never been a coach. But even after leaving Tibet, the dream still haunted him.
“When I got back home I started to study at the Kaospilots programme in Aarhus and there my dream became a focal point for me. My fellow students and principal kept pushing me towards the idea, asking: “If Tibet doesn’t have a national football team, why don't you help them start one?" Well, then I did. I got involved and the Tibetan exile government then asked if I would help them form a sports association and national team,” he told The Local.
That set off what Nybrandt described as the biggest challenge of his life, navigating through the political, cultural and financial minefield needed to get the team off the ground. But he pulled it off, and a match was scheduled between Tibet and Greenland in Copenhagen. The problems, however, didn’t end there.
“China started to threaten all the involved parties. We had trouble finding players and getting visas and a few days before the match, there was an airline strike on Greenland, so half of the players were stocked in Nuuk and Greenland’s coach had to find a bunch of new players in Denmark,” he said.
Against all odds, however, the match took place on June 30th, 2001.
Fourteen years later, the now 44-year-old Nybrandt wants to share his story with the world in the form of a graphic novel, which he is attempting to fund through Kickstarter.
“A graphic novel is a great medium for this type of story and I found the most talented illustrator, Thomas Engelbrecht Mikkelsen. The novel is based on a true story, but told as I remember it. That gave me the freedom to focus on certain parts of the story that are more interesting, for example a vital meeting I had with the Chinese Ambassador in which I had to bluff big time in order to make sure the game went on,” he said.
Nybrandt is now trying to get his graphic novel, ‘Dreams in Thin Air’, published via the crowdfunding site. With less than two weeks to go, he’s a little more than halfway to the 180,000 kroner needed to realize the project.
“Crowdfunding on Kickstarter is like a race and we are in the final stage, but I'm confident that we will make it on time. ‘Dreams in Thin Air’ is too good not to be published and I hope people will support the campaign until it ends on 13th March. The story is not just about Tibet and football. It has an underlying universal theme about believing in your dreams and never giving up,” he said. 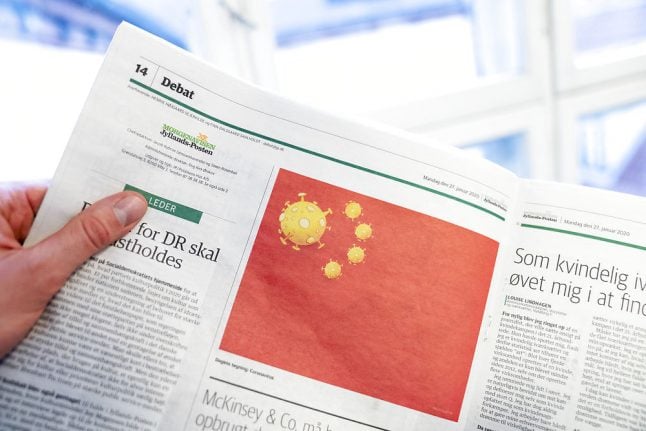