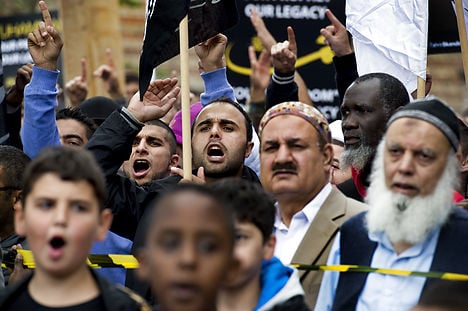 Hizb ut-Tahrir supporters shown protesting the film Innocence of Muslims in 2012 outside of the American Embassy in Copenhagen. Photo: Søren Bidstrup/Scanpix
A political majority is calling on the nation’s public prosecutor office (Rigsadvokaten) to explore the possibility of banning the pan-Islamic group Hizb ut-Tahrir, which is already banned in neighbouring Germany and a number of other countries including Saudi Arabia, Egypt, Turkey, Russia and China.
Politiken reports that Justice Minister Mette Frederiksen is leading the charge to get the group barred from Denmark.
“My own opinion is that the organization should be broken up. And as soon as the public prosecutor says there are grounds to break it up, it will happen,” Frederiksen told the newspaper.
Hizb ut-Tahrir has campaigned since 1953 for the establishment of a global Islamic caliphate, although unlike groups such as Isis and Al-Qaeda, it claims to reject the use of violence to establish its goal.
Active in some 40 countries around the world, it runs its Scandinavia chapter from Copenhagen. Although it is listed as one of five Muslim extremist groups operating in Denmark, a 2008 attempt to ban the group failed when the public prosecutor ruled that there were no legal grounds to do so.
Hizb ut-Tahrir has often been at the centre of controversy in Denmark. Following the twin shootings in Copenhagen two weeks ago, Hizb ut-Tahrir said that the Danish society should bear the blame for the actions of gunman Omar El-Hussein.
“Danish politicians and media should condemn the policies that have created the circumstances that lead to hate, threats, violent attacks and in the most extreme cases death,” fliers distributed by the group said, telling Muslims it was "vital" to not distance themselves from the attack.
Junes Kock, the Danish convert who serves as the group’s media spokesman, also derided Denmark’s new anti-radicalization strategy last month, saying that it is not Muslims who need help, but young Danes who need rescuing from a "sad Western culture" and its "capitalist existential void".
In December, Hizb ut-Tahrir held a ‘Proud of Sharia’ rally in Copenhagen to denounce what it called “an attack against Islam and Muslims” by city officials.
In 2002, the group’s members handed out leaflets in Copenhagen with a clear anti-Semitic message.
“The Jews are a people of slander… a treacherous people… they fabricate lies and twist words from their right context,” the leaflets read, before justifying suicide bombings in Israel as "legitimate" acts of "Martyrdom".
Despite the group’s track record, Kock said that the renewed push to ban Hizb ut-Tahrir from Denmark is “a sign of desperation and a clear admission of failure”.
“It is known worldwide that we are an ideological political party that doesn’t support violence but rather calls on thought. But we are in an election year and after the tragic events of recent weeks, [politicians] want to show their vigour,” he told Politiken.
The new attempt to ban Hizb ut-Tahrir comes as the Austrian government passed a law Wednesday banning foreign sources of financing to Muslim organizations and requiring imams to be able to speak German, in a move closely watched by other European nations facing growing problems with radical Islam.
Url copied to clipboard!