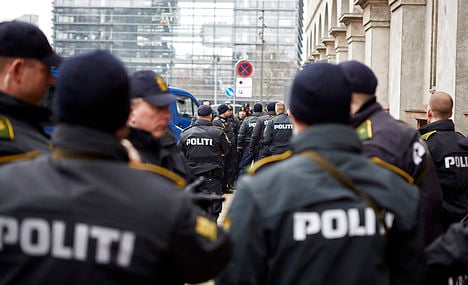 Police are seen waiting outside the two men's preliminary court appearance on February 16th. The suspects had their detention extended on Thursday. Photo: Michael Bothager/Scanpix
The two men suspected of helping Omar El-Hussein get rid of weapons used in the shootings at a cultural centre and a synagogue earlier this month, and of giving him a hiding place, will spend another four weeks in police custody.
The suspects appeared in court for the custody hearing, which took place amid high security and, despite the objections of defence lawyers, behind closed doors.
"The two charged in connection with the… weekend shooting attacks will continue to be remanded in custody for four weeks until March 26," Copenhagen Police said in a statement.
"A request by the prosecution that the detention should take place in isolation was not granted," the statement added.
See also: Two charged for aiding Copenhagen gunman
The two men, aged 19 and 22, have denied the charges. Their names can not be made public for legal reasons.
El-Hussein was shot dead by police after his February 14-15 shooting spree that send fresh shockwaves across Europe after the Islamist attacks in Paris in January.
The gunman killed a Danish filmmaker outside a cultural centre hosting a debate on Islam and free speech before opening fire at a synagogue, killing a Jewish man.
El-Hussein had been released from prison two weeks before the attacks after serving a term for aggravated assault, raising fears he may have become radicalised behind bars.