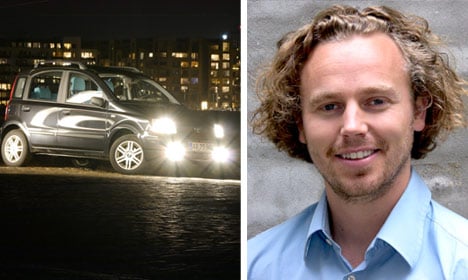 Søren Riis helped bring the ridesharing concept to Denmark. Photos: GoMore, Submitted
Søren Riis, along with Matias Møl Dalsgaard, founded GoMore – the popular ridesharing and peer-to-peer car rental system – in 2005 while they were studying philosophy together in Germany. The site quickly became the leading ridesharing portal in Denmark and existed for many years as a spare-time project. In 2011, GoMore expanded its team and relaunched on new technology. In 2013, GoMore received angel investment and the team went full time.
How did you come up with this business idea?
Matias and I lived in Germany in 2004 and realized carpooling had great potential since many people used it, including a lot of our fellow German students. At that time, carpooling in any systematic form was unknown to the public in Denmark, and we decided to change that. We wanted to take carpooling to Denmark as it fit very well into the green agenda of modern societies, presented a very cheap means of transport and had nice social implications.
What were the initial challenges? How did you overcome them?
The initial challenges were to find a good programmer and to develop a business model that customers would like and would allow us to evolve the project from a hobby to a full-time profession. After more years of having a semi-functional and free site, we developed a 'no cure, no pay' business model, which gave 91 percent of the transportation cost to the drivers and nine percent to us. That was all what we needed to start generating an income, hire more developers and create an user-friendly page and give much better customer-service.
How has the journey been so far?
It was a bumpy road until we teamed up with two good developers and received angel funding two to three years ago. After that, we experienced significant growth. Recently, we have combined carpooling with peer-to-peer car rental and a leasing concept, which has allowed us to hire new, highly-skilled people and take our concept to new markets.
How has becoming an entrepreneur changed you, personally?
The world of academia and entrepreneurship are quite different, although both require good time management skills, an international mindset and the ability to think rather independently of pre-established frameworks. Entrepreneurship requires you to develop a more pragmatic understanding of a number of issues, to fund the work of your employees as well as your own and to be able to execute on rather short and strict deadlines.
Any other personal reflections and/or message to budding entrepreneurs?
Three points of advice:
a) Think big but don’t forget the everyday small goals you have to reach,
b) Let yourself be inspired by a world of excellent concepts but make sure there is coherence in your own company,
c) As a company operating in the sharing economy, it is even more important than usual to give centre stage to the needs of your customers and create an environment where the customers would like to go – they are both the providers and clients of your services.
Are you an entrepreneur in Denmark? Get in touch and we might tell your story.