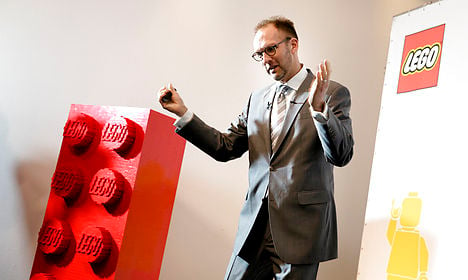 Lego CEO Jørgen Vig Knudstorp. Photo: Martin Dam Kristensen
Things are pretty awesome for Danish toy company Lego. Fresh off its crowning as both the world's largest toy company and most powerful brand, the company on Wednesday announced that 2014 was its best year ever.
The Lego Group’s sales hit 28.6 billion kroner last year and the company’s net profit was 7.0 billion kroner. Both figures represent records for the Billund-based company.
“In 2014 we increased our sales by 15 percent. I am proud that we delivered high quality creative play experiences to millions of children all over the world. This resulted in a highly satisfactory result for us, and it remains our aspiration to be the best at what we do,” Jørgen Vig Knudstorp, CEO of the Lego Group, said in a statement.
While Knudstrop’s written statement was fairly low-key, he got significantly more lively at Wednesday’s press conference, breaking into song and dance to the tune of Everything is Awesome from the highly-successful Lego Movie.
See the Lego head’s ‘awesome’ reaction here: