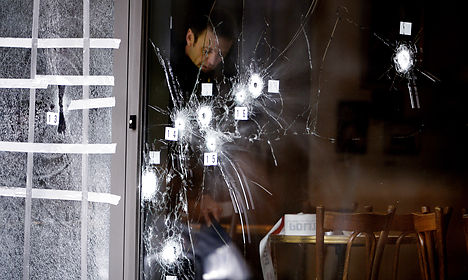 Witnesses have stepped forward to criticize the security response at the February 14th shooting. Photo: Liselotte Sabroe/Scanpix
Two employees of the Krudttønden cultural centre where an armed assailant fired nearly 30 shots and killed a 55-year-old man have stepped forward to criticise the “enormously unserious" security at the event.
Speaking anonymously to Politiken, the two witnesses claim that two Danish police officers were having coffee with their backs turned towards the door at the building entrance when the gunman started shooting.
“Everything was very random and there was nothing to indicate that they viewed the event as high-risk,” one witness told Politiken.
Neither police nor Danish security service PET wished to comment on the claims, reports Politiken.
One of the witnesses also said that controversial Swedish artist Lars Vilks, who is believed to have been the target of the attack, was at one point standing outside the cultural centre alone and unguarded despite the fact that he has lived under police protection since 2007. Vilks himself has also criticised the security at the event.
Read The Local's interview with Lars Vilks
“Lars Vilks was the main reason that the event was characterized as high-risk. It is flabbergasting that I saw him alone outside the building,” the witness said.
The same witness added that it was an employee, and not a police officer or an agent from the Danish or Swedish security services, who first noticed the gunman.
“I know there were also PET [Danish intelligence, ed.] and Säpo [Swedish intelligence, ed.] in the cafe with the two police officers but when it is one of the cafe workers who is the first to yell ‘man with a gun’ before anyone reacts, it’s a sign that the threat was underestimated,” the witness said.
TIMELINE: How the Copenhagen attacks unfolded
Vilk's Swedish protection has previously been hailed for stalling an attack that could have turned into a mass murder.
A source speaking to Swedish newspaper Sydsvenskan said one of the officers guarding Vilks officers shot at the gunman and prevented him from entering the building.
“I know that one of them emptied his entire gun,” he told the paper, adding that this had “interrupted the attack” and suggesting that this may have prevented further casualties. Neither Danish nor Swedish police have confirmed the claims.
The gunman, identified by police as 22-year-old Omar Abdel Hamid El-Hussein, was shot to death by police following a second attack at a synagogue hours later.
The victim of the Krudttønden shooting, filmmaker Finn Nørgaard, will be laid to rest on Tuesday.