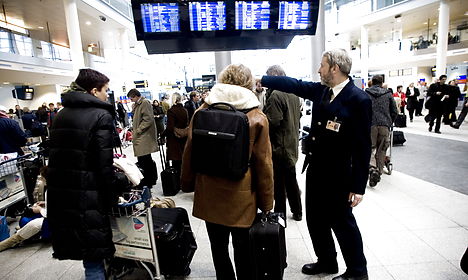 SAS flights at Copenhagen Airport are being affected by a work stoppage. Photo: Kristian Juul Pedersen/Scanpix
A work stoppage by SAS baggage handlers created headaches for travellers at Copenhagen Airport, creating cancellations and delays for all flights operated by the airline.
The SAS Ground Handling strike began shortly after 11am and workers returned to work just before 1pm.
A SAS spokeswoman called the stoppage “completely unacceptable”.
“This is an illegal work stoppage and we have asked the union representatives to immediately get people back to work,” Trine Kromann Mikkelsen told TV2.
As of shortly after 12pm on Tuesday, the airline had cancelled ten departures and even after workers returned to the job, passengers were warned that delays and cancellations remained likely.

SAS employees have returned to work. Delays and cancellations must be expected the rest of the day. Contact your airline for information.

The short work stoppage was the third strike by SAS Ground Handling crew members in the past eight months. An October strike lasted around 90 minutes and caused at least seven cancellations and numerous delays while a three-hour stoppage in June delayed more than a dozen flights and cancelled two.
The conflicts are a result of SAS's decision last year to lay off 900 baggage handlers in order to force new negotiations on a local level.