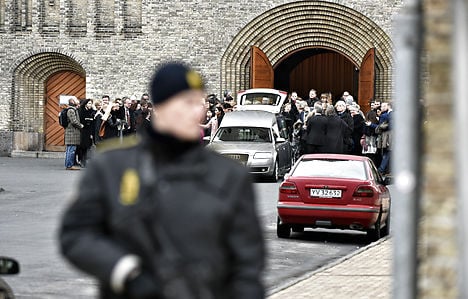 The funeral of Finn Nørgaard, who lost his life during the shooting at Krudttønden on February 14th, was held at Copenhagen's Grundtvig's Church on Tuesday under tight security. Photo: Anders/Scanpix
Several hundred mourners turned out Tuesday for the funeral of the first victim of the Copenhagen shootings amid reports the filmmaker had died trying to stop his killer from spraying a cultural centre with bullets.
At least 40 heavily armed police officers guarded the church in the northwest of the city as Prime Minister Helle Thorning-Schmidt joined the mourners to bid farewell to 55-year-old Finn Nørgaard.
See also: Copenhagen shooting victims remembered
Police estimated that around 750 people attended the ceremony. Among the attendees were representatives of Denmark's Muslim and Jewish communities as well as several high-profile politicians.
Nørgaard was shot dead outside Krudttønden cultural centre on February 14th during a seminar on free speech and Islam in the first of two attacks by a gunman who also killed a Jewish man outside a synagogue.
The security at Krudttønden has been criticized in the days following the attacks, most recently on Tuesday when two witnesses stepped forward to describe what they called the "unserious" reaction from police officers.
See also: Witnesses slam security at Copenhagen shooting
Jyllands-Posten reported witness accounts that Nørgaard had tried to intervene as the gunman — named by police as Omar El-Hussein, a Dane of Palestinian origin — fired off around 28 bullets at the cultural centre.
"We do not know what Finn was thinking in that situation, but we are sure that it was not his own security but that of others he was concerned about," Nørgaard's two sisters wrote in a letter published in several national newspapers.
"Finn was a human who took action when help was needed or in dangerous situations," they wrote.
Known primarily for making documentaries, Nørgaard had a special interest in the problems of integration. One of his best known works, however, was a 2004 film about a young Australian boomerang thrower.
The second victim of the Copenhagen attacks, 37-year-old Jewish volunteer security guard Dan Uzan, was buried on February 18th.