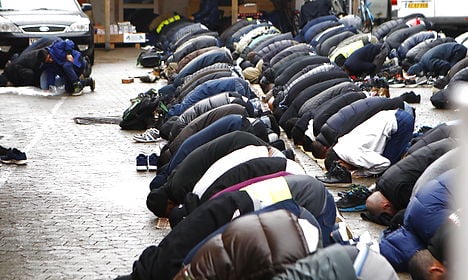 The planned peace vigil will come one week after hundreds of Muslims attended burial services for the gunman. Photo: Nils Meilvang/Scanpix
A Danish Muslim group Monday said it was planning a peace vigil in the heart of Copenhagen this week to protest against hate crimes after this month's twin attacks in the city.
"We do not accept attacks on people whether your name is Finn, Dan or Aisha," said a statement from Tanwir Ahmad of The Network, which gathers Muslim academics.
"We want to send a signal that we all share responsibility for well-being and security in Copenhagen," he added.
The vigil to be held in central City Hall square on Friday was inspired by a similar event on Saturday in Oslo where a group led by young Muslims formed a symbolic ring outside a synagogue, the organizers said.
The Network's announcement was made after Copenhagen police said they had denied a request by Danish Muslim businessman and activist Niddal El-Jabri to form a symbolic ring outside the city's main synagogue, citing security reasons.
See also: Police say not to Danish Muslims' 'peace ring'
"The security level in Copenhagen is very high, including around the synagogue where there are police who are heavily armed right now," police spokesman Mads Jensen told AFP.
El-Jabri said he had turned down suggestions to hold the event elsewhere since it risked moving the focus away from Denmark's Jewish community.
"It's about focusing on the fact that the Jewish community shouldn't be used as pawns in the conflict between Israel and Palestine," he told public broadcaster DR.
By contrast, the organizers of Friday's vigil said that they wanted their human chain to focus on all types of hate crimes, not just anti-Semitism.
Danish Muslims have reported a rise in anti-Muslim violence and discrimination since the twin attacks in Copenhagen on a free-speech seminar and a synagogue that killed two people, a Jewish man and a filmmaker.
Denmark's Jewish community, meanwhile, was reporting an increase in anti-Semitism even before the fatal attacks, which police say were carried out by Omar El-Hussein, a Dane of Palestinian origin.
The Danish attacks, which occurred just weeks after gunmen killed 17 people in Paris, raised fears in Nordic countries of heightened tension between religious communities.
Swedish organizers are also planning a "peace ring" human shield outside Stockholm's synagogue on Friday.