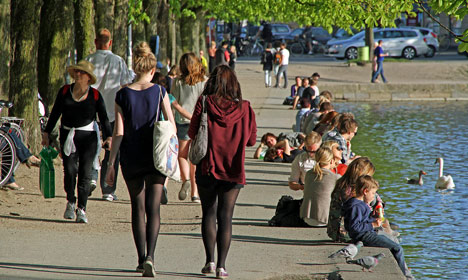 Fear not, spring will come. Photo: Colourbox
In its monthly prognosis, DMI wrote that the chance of winter weather extending into March “is not very great”.
“Those who are fond of snow and winter should head to the Nordic or alpine ski destinations to satisfy their desires,” DMI wrote, saying that milder weather is on its way.
As so often is the case when it comes to the weather in Denmark, however, there was a ‘but’.
“The mild weather comes with a price as things will become more unstable and windy,” the meteorologists cautioned.
DMI was calling for daytime temperatures this week to top out between 3-7C, as low-pressure systems bring winds and precipitation. The mixture of rain, sleet and snow was predicted to last through Tuesday and the sun looks to be an infrequent guest throughout the remainder of the week.
When March arrives next week, Denmark could still be in for wet, windy and cold conditions and night temperatures as low as -5C despite the official start to spring. Denmark uses the meteorological definition of seasons, meaning that spring refers to the months of March, April and May as opposed to beginning on the spring equinox and ending on the summer solstice as in some other countries.
While the immediate forecast might not be enough to assuage the woes of winter-weary Danes, DMI predicts that March will end 1-2C higher than its 10-year average temperate of 3.0C. Both April and May are also predicted to be “a little warmer than usual” with DMI saying that the monthly daytime average for both months should top their 10-year norms, which are 7.4C for April and 11.4C for May.