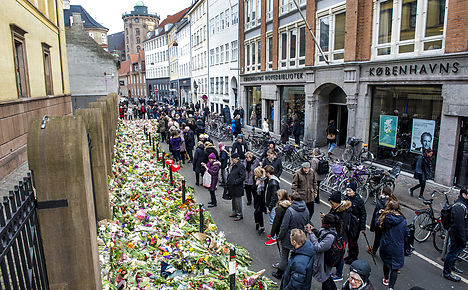 Copenhageners pay their respects at the synagogue on Krystalgade. Photo: Søren Bidstrup/Scanpix
Copenhagen resident Niddal El-Jabri wanted to create a peace ring around the synagogue on Krystalgade, where volunteer security guard Dan Uzan was shot and killed the week before.
“I feel terribly bad that Jews are so scared and I can understand their fear. I cannot understand why there are people who are threatening them,” El-Jabri told public broadcaster DR.
Along with some friends, El-Jabri pursued the idea of creating a ring of Muslims around the synagogue. He said that many people reacted positively to the idea, but when he went to the Copenhagen Police to request permission he was told that due to security concerns, he couldn’t go through with his plans.
Although he was disappointed that Danish Muslims couldn’t display a show of support similar to the one in Norway that attracted more than 1,000 people, El-Jabri said he could understand the police decision.
See also: Norway's Muslims support Jews after Denmark attacks
“I completely understand that they said what they did. They have a job to do and that without question should come first,” he told DR, adding that he would maintain dialogue with the police about holding a peace vigil at a later time.
Although the ‘ring of peace’ didn’t go off as planned, El-Jabri’s efforts were appreciated in the Jewish community, where even before last weekend's attacks there had been increasing reports of anti-Semitism.
“It is a really good initiative. I think it is touching and beautiful,” Dan Rosenberg Asmussen, the head of the Danish Jewish community, told DR.
Asmussen said he hoped that a display of unity could be held at the synagogue at a later point. Denmark’s chief rabbi, Bent Melchior, agreed.
“The police themselves know best about their available resources, but I think that the initiative is so important and I really hope that it happens.” Melchior told DR.
See also: Denmark buries Jewish victim amid security questions
The 37-year-old Uzan was the second of two men killed last weekend in Copenhagen.
The gunman, named by police as 22-year-old Omar El-Hussein — a Dane of Palestinian origin — was reportedly radicalized by Islamists in jail. Muslims in Norway created a 'ring of peace' at an Oslo synagogue on Saturday. Photo: Hakon Mosvold Larsen/NTB Scanpix

NORWAY
AFTER LOCKDOWN: Are Denmark’s and Norway’s restrictions now like Sweden’s?
Url copied to clipboard!