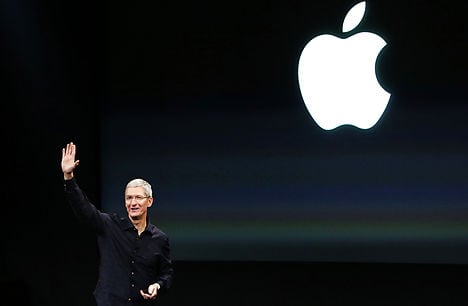 'Hello, Denmark!' Apple CEO Tim Cook has announced that Viborg will host one of the world's largest data centres. Photo: Robert Galbraith/Scanpix
In a press release Monday, Apple said it would spend €1.7 billion (17.2 billion kroner) to establish and operate two new European data centres. One will be located in the central Jutland town of Viborg while the other will be placed in County Galway, Ireland.
“This significant new investment represents Apple’s biggest project in Europe to date. We’re thrilled to be expanding our operations, creating hundreds of local jobs and introducing some of our most advanced green building designs yet,” Apple CEO Tim Cook said.
According to Apple, both centres will run on 100 percent renewable energy and will power the company’s online services like the iTunes Store, App Store, iMessage and Siri.
“I warmly welcome this investment by Apple, which will give a significant boost to the Danish economy. An investment like this confirms that Denmark has managed to strike the right balance between an ambitious and climate-friendly energy policy and a world-class business environment,” Mogens Jensen, Denmark’s trade and development minister, said in a statement.
Apple said it will work with “local partners to develop additional renewable energy projects from wind or other sources” and that the Danish and Irish centres “will have the lowest environmental impact yet for an Apple data centre”.
Jensen said that the Foreign Ministry’s investment organization, Invest in Denmark, worked on the Apple deal for three years. He said that Apple’s choice of Viborg “confirm[s] Denmark’s position as a world leader within green solutions and renewable energy technology”.
The Viborg data centre will measure 166,000 square metres and is expected to begin operations in 2017.