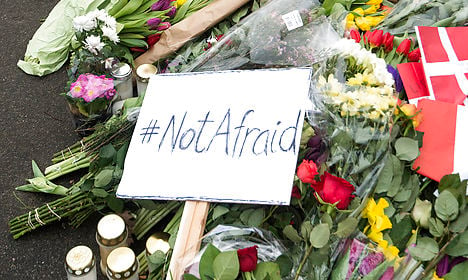 Many prominent Danish voices have remained defiant in the wake of the Copenhagen shootings. Photo: Søren Bidstrup/Scanpix
Insults, axe attacks and bullets — nothing deters noted Scandinavian journalists and cartoonists in the crosshairs of radical jihadists from free speech even if it means living under permanent police protection.
The most prominent in recent years, 68-year-old Swedish cartoonist Lars Vilks, whipped up a storm across the Muslim world with his now storied 2007 sketch of the prophet Muhammad as a dog.
Targeted in several foiled plots, Vilks survived the latest attempt on his life last weekend when a gunmen sprayed a hail of bullets at a Copenhagen cultural centre hosting a conference on blasphemy where the controversial cartoonist was a guest speaker.
One of four Scandinavians on an Al-Qaeda hit list of 11 enemy targets, Vilks told The Local that he has "no reason to be scared" and will carry on with his Lars Vilks Committee.
See also: Lars Vilks: 'Of course I don't have a responsibility'

An image from an issue of al-Qaeda's online Inspire magazine shows a 2013 poster listing 11 figures "wanted dead or alive for crimes against Islam". Three of the targets are Danish. AFP PHOTO / HO / AL-MALAHEM MEDIA
'Wanted dead or alive'
For a decade now Scandinavia has lived under Islamist threat for pushing the boundaries of a free press.
The battle began in 2005 with the publication by Danish daily Jyllands-Posten of 12 cartoons of Muhammad deemed so offensive in the Muslim world that they sparked global protests.
Most controversial of all was the depiction of the Islamic prophet wearing a bomb in his turban, the work of Danish cartoonist Kurt Westergaard, now 80 years old.
The men responsible for the publication of the cartoons, later reprinted by others including French weekly magazine Charlie Hebdo, were Jyllands-Posten's former editor-in-chief, Carsten Juste, and its former culture editor Flemming Rose.
The three Danes and Vilks are among 11 people targeted in 2013 by the Islamist magazine Inspire as "wanted dead or alive for crimes against Islam".
The list includes The Satanic Verses author Salman Rushdie and Charlie Hebdo cartoonist Stephane Charbonnier, one of 12 people killed when jihadist gunmen stormed the Paris office of the weekly last month.
Westergaard has been targeted several times, including in an axe attack by a Somali hitman in 2010 in which he made an escape to his high-security bathroom.
Now elderly, Westergaard has largely withdrawn from the public eye, as has Juste, who is 67.
In Sweden, Vilks is continuing his critique of Islam though satire on religion is less widespread there than in some other European countries.
See also: Jyllands-Posten ups security after Paris attack Cartoonist Kurt Westergaard is one of three Danes on Al-Qaeda's 'death list'. Swedish artist Lars Vilks is also on the list. Photo: Henning Bagger/Scanpix
Return to 'Middle Ages'
Rose too remains an active proponent of the right to free speech in his role as foreign editor of Jyllands-Posten, where security is tight and where he is constantly accompanied by bodyguards.
"A Europe without blasphemy is back in the Middle Ages," the 56-year-old journalist wrote in a column this week in Britain's Guardian newspaper.
His fight for free speech earned him a nomination for the Nobel Peace Prize this year and on Tuesday Danish daily Politiken — having in 2010 apologised for reprinting some of the cartoons — said in an editorial that the threat to freedom of expression "has gradually dawned on even the most staunch multiculturalists".
While hate speech and defamation are punishable by law throughout Scandinavia, Sweden became the first country in the world to legally protect press freedom in 1766.
All five Nordic countries made the top 10 list for freedom of expression in 2013 rankings published by Reporters Without Borders.
But unlike the rest of the Danish press, Rose's embattled paper Jyllands-Posten refused to carry Charlie Hebdo's satirical cartoons after the January attacks, citing security reasons.
See also: Jyllands-Posten defends Charlie Hebdo decision
"Who says that it was a must to reprint these drawings?" Danish media expert Lasse Jensen told AFP. "I don't think that freedom of expression today in Denmark is any more threatened than a week, a month or 10 years ago. People still express themselves and they do so freely."
The Local has also decided against republishing the Charlie Hebdo, Jyllands-Posten or Lars Vilks cartoons.
In the aftermath of the Copenhagen attacks, popular support for publishing controversial cartoons took a significant fall. In an opinion poll carried out shortly after the Paris attacks, 79 percent of respondents said that Danish media should not refrain from publishing "satirical drawings and expressions that can be offensive to religious groups". When the same question was posed in the days after the Copenhagen attack, that number fell to 63 percent.