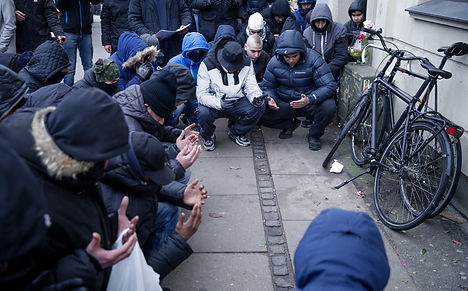 A group of young men pray at the spot where Omar El-Hussein was killed by police. Photo: Jens Astrup/Scanpix
A drab collection of four-storey buildings in a rough area of Copenhagen has become a potent symbol of Denmark's struggles with integrating Muslims in the wake of last week's attacks.
The Mjølnerparken neighbourhood was the home of 22-year-old Omar El-Hussein, the Danish-born man of Palestinian origin who is believed to have carried out the attacks that killed two people.
It is also where 86 percent of residents have an immigrant background and 46 percent have no job — in a country where unemployment is among the lowest in the European Union.
See also: Immigration in Denmark at an all-time high
Like similar immigrant-heavy districts in other big European cities, young Muslim men pose a particular challenge.
"It's important to take these young people seriously," said Mehdi Mozzafari, an Iranian-born specialist on Muslim extremism at Aarhus University. "So far, no one has been serious about the aspect of cultural integration. It's something that needs to be tackled right from primary school."
Similar debates have played out across western Europe, particularly following the January attacks in Paris, with France having long faced criticism over the isolation of its suburbs.
In Denmark even before last weekend's attacks, alarm had already been raised over the number of young Muslim men who have gone to fight with Isis militants.
Some 110 Danish Muslims, out of a total population of 5.6 million, have joined the fight in Syria, according to intelligence estimates. Measured per capita, Denmark is the second largest European source after Belgium of jihadist fighters going to the Middle East.
For certain young people, "the military interventions in the Middle East are seen as an attack on their real countries, their real people, carried out by the countries where they happen to live," Mozzafari said.
Close to ten percent of the Danish population have a foreign background, and 420,000 have roots in a non-Western country, according to official statistics.
For years, Danish government policy has been emphasizing integration through education and access to the job market. But immigration curbs imposed in the period from 2001 to 2011, when the anti-immigrant Danish People's Party had direct influence on the policies of the governing centre-right coalition, have left many feeling that they don't belong. Police stand guard at Mjølnerparken over the weekend. Photo: Bax Lindhardt/Scanpix
'A big community'
The attacks last weekend saw the gunman, believed to be acting alone, open fire on the venue of a debate on Islam and free speech attended by Lars Vilks, the Swedish artist behind a controversial Prophet Mohammed cartoon.
A filmmaker was killed there, while the attacker, who escaped, later shot dead a Jewish man outside the city's main synagogue. He was then killed in a shootout with police early Sunday.
Residents of Mjølnerparken who were willing to speak took exception to characterizations of their neighbourhood as a dangerous or undesirable area. They spoke of it as a community and rejected the word "ghetto."
See also: Half of Danes want to limit Muslims in Denmark
Among the neighbourhood's buildings, a square painted with graffiti had been turned into a children's playground.
"When I tell people I live there, they're like, 'Wow, what's that like?'" said 23-year-old Nasrin, who is studying to become a social worker. For her, Mjølnerparken is above all "a big community".
"As long as you have a job, or go to school or university, you don't have problems," said Zacharios, 50 and of Palestinian origin.
A few blocks away, in the busy streets of the Nørrebro district, children were walking home from school. Camilla, a 20-year-old waitress, was heading to work.
"I really love living here. It's different from the other parts of the city. I love the people, the facilities. There are lots of different people," she said.
Sune Lægaard, a professor of political philosophy at Roskilde University and an expert on multiculturalism, said there seemed to be a contradiction in Danes' views on immigration.
"Surveys show that the Danes are among the most tolerant towards diversity, even if they say they are against immigration," said Lægaard.
See also: Half of Danes 'ashamed' by immigration debate
Though several Danish mosques have condemned the weekend attacks, other Danish Muslims are cautious in their statements.
Jehad Al-Farra, the spokesman of the Danish Islamic Council, said the fatal shootings had "hurt the Muslim community."
He speculated that the perpetrator maybe "wanted to start a revolution in society, because he had not succeeded in that society."