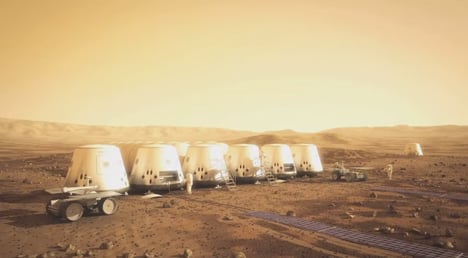 Christian Knudsen's future home? Screenshot: YouTube/Mars One
Nearly everyone at one point has thought of leaving everything behind and starting over someplace new, but Christian Knudsen has taken that idea to new heights. Really new heights.
The 34-year-old Køge native is one of 100 finalists for the Mars One project, a Dutch mission that aims to send four people on a one-way trip to the Red Planet in 2024.
After more than 200,000 initial Earth dwellers – including 497 other Danes – applied for the mission, it has now been pared down to 50 men and 50 women. Knudsen, a system engineer, is among them.
He told The Local that he initially threw his hat into the ring without much time to think about it.
“I found out about the mission only a few weeks before the deadline, so the initial decision was based mostly on the positive aspects of the mission, with an understanding that I could withdraw my candidacy at any time if I grew anxious or disillusioned,” he said.
Now that the process has rolled on, he says he’s had no second thoughts.
“To me it's basically an assessment of pros and cons, the cons being the risks (obvious and not) that come with such an ambitious undertaking. The pros, in my opinion, are most easily likened to the Apollo missions of the late 60s and early 70s, In their wake came a flood of technological advances and a substantial increase in students of engineering, physics and basic science. In my opinion, that could easily lead to a better life for all of us,” he told The Local.
Strangely enough for a man who has volunteered to live out the remainder of his days on a distant planet, Knudsen said he’s a bit of a homebody.
“I don't really like the idea of travelling, I'm pretty content where I am. But when I do travel I usually have a great time and learn lots of new stuff,” he said.
Knudsen, who used part of his video application to talk about his “very typically Danish” sense of humour, has never lived outside the confines of Denmark but doesn’t see that as a hindrance.
“I'm pretty sure I'm in for a shock no matter how well I think I've prepared, I don't think my origins will play a big role in that regard,” he said.
In the contest to see “who has what it takes to colonize Mars and never return”, Knudsen is not only among the final 100, he currently sits at the top of the pack with the most contributor points on the Mars One website.
If he does make the final cut – a process that will be played out as part of a proposed reality TV programme – he knows he’s in for “hardship [and] poor ventilation”.
“I know this is no picnic, but I believe we should be ready to sacrifice for ideas we believe in, and this is my time to live by my own words,” he said.
“No picnic” may be putting it mildly. The Massachusetts Institute of Technology (MIT) conducted an analysis of the mission’s feasibility and concluded that even if Knudsen makes it to Mars – MIT sees the whole mission as an extreme long shot – he and his co-settlers would likely suffocate within 68 days.
But the Mars One project still has nine years to alter its colonization plans and Knudsen still has to survive the next round of cuts. He says he is keeping his expectations realistic.
“I don't know all of the criteria we're judged by and there's some pretty great people among the other 100, I'd like to think my chances are around four in 100, that way I can't really lose no matter the outcome,” he said.