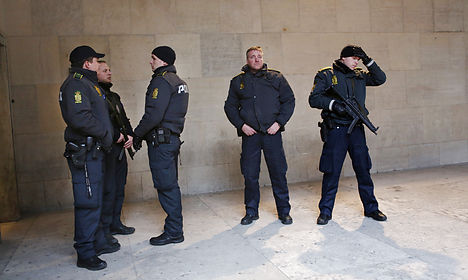 Police wait outside a Copenhagen court where two men were charged on Monday with aiding the weekend's shootings. Photo: Michael Bothager/Scanpix 2015
Two men have been charged with aiding the suspected gunman in the twin attacks in Denmark at the weekend, police confirmed on Monday.
A lawyer for one of the men had said earlier they were charged with helping the attacker get rid of his weapon and giving him somewhere to hide.
Police confirmed they had been charged with aiding and abetting the gunman but did not confirm the specific allegations.
The two suspects, who appeared in court on Monday following their arrest on Sunday, cannot be named for legal reasons.
Police had earlier announced the arrest of two men "suspected of aiding and abetting the perpetrator" of the deadly shootings at the Krudttønden cultural centre and the synagogue in Krystalgade.
Both suspects are from an immigrant background, tabloid Ekstra Bladet reported.
The gunman himself, who was killed in a pre-dawn shootout with police on Sunday, has been identified in the media as Omar El-Hussein, a 22-year-old with a history of violent crime.
Ekstra Bladet said he had been released from prison two weeks ago after serving a term for aggravated assault — raising fears he may have become radicalised behind bars.
Flags were flying at half-mast in Denmark on Monday after the attacks that targeted the  cultural centre during a debate on Islam and free speech and the city's main synagogue.
See also: Copenhagen shooting victims remembered
A documentary film-maker attending the debate and a Jewish guard at the synagogue were killed and five policemen injured.
Police carried out a series of operations in the Copenhagen area on Sunday, including an afternoon raid on an internet cafe in the inner city district of Nørrebro.
The raid took place in the same area where the suspected gunman was killed during an exchange of fire with special police forces early Sunday.