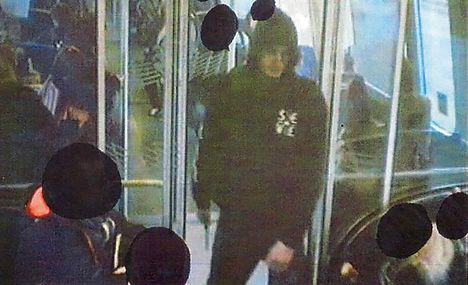 An undated picture released by Copenhagen Police in 2013 shows the man suspected of killing two people. Photo: Københavns Politi
When Danish media flashed images of the suspected Copenhagen gunman, Julie recognized her "nice and very smart" former classmate Omar El-Hussein, a good Samaritan who a year ago rushed to her aid.
"I am deeply moved and shocked," the 20-year-old told AFP in a telephone interview from Copenhagen.
"I would never have believed the terrorist was a classmate, that it would be a boy who helped me when I was run over outside school," she said. "When I was run over, he ran to me and helped me get back to school."
But three days later, in late 2013, the young man — who police said had a history of violence and weapons offences — stabbed a passenger on a Copenhagen commuter train and went to jail.
Several Danish media have identified 22-year-old El-Hussein as the gunman behind two fatal shootings in Copenhagen at the weekend who was later shot dead by police.
See also: Suspected gunman born and raised in Denmark
Julie — who would not reveal her surname — attended the same fast-track high school course for bright students as El-Hussein in Hvidovre, a southwest suburb of Copenhagen.
The school principal Peter Zinkernagel told Danish public broadcaster DR that he was a "talented and smart student", which Julie confirmed.
"He sometimes behaved pretty aggressively but otherwise he was nice and very smart. He had good grades at school, he had friends and he was a good classmate," she said, recalling how "he worked out in the yard, he was strong."
Danish-born El-Hussein — said to be of Palestinian origin — spoke good Danish as well as Arabic, according to Julie who still remembers vividly the day he rushed to her assistance.
Yet according to Danish media, her rescuer had links to Copenhagen's criminal gangs.
'It's unbelievable'
Public broadcaster DR said he was expelled from school after stabbing a 19-year-old man on a train.
"I saw him that day, it was the last time I saw him… I was really shocked, I couldn't believe it," said Julie.
Danish press reports said he was given a two-year jail sentence and was just released two weeks ago.
"At first I considered him to be a good person with a good heart because he had helped me. And then I heard that he had hurt someone — and now this. It's unbelievable," said Julie, who has a Christian mother and Muslim father of Pakistani origin.
"Muslim or not doesn't make much difference today. We're all Danes," she added, saying she sees herself as a "mix of Muslim and Christian".
The day after the attacks she appealed for unity on her Facebook page.
"Let us be united because it is together that we are strongest," she wrote.