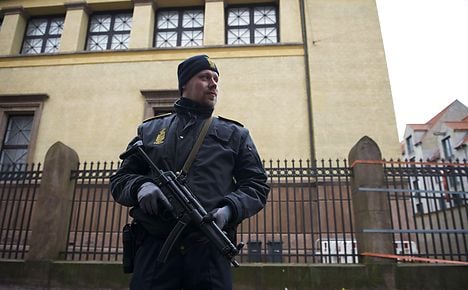 A police officer stands guard outside the synagogue Krystalgade in Copenhagen on Sunday. Photo: ODD ANDERSEN/Scanpix
The alleged gunman in Copenhagen's dual shooting attacks, who was himself killed in a shootout with officers early on Sunday, was known to police due to his involvement in gangs, police said in a statement.
"He is a young man aged 22, born in Denmark, and he is known by police for several crimes," the statement said.
He had a history of assault and of violation of Danish regulations on the possession of weapons, according to the statement, which did not give further details.
Although police did not name the subject, TV2 News reported that it the man's name is Omar Abdel Hamid El-Hussein. Subsequent media reports said that the the 22-year-old was released from jail only two weeks ago after serving a term for aggravated assault.
The police statement added that the investigation was focusing on the man's movements before, during and after the shootings.
It said investigators were also trying to ascertain if the suspect had received assistance from others.
Police carried out extensive operations in the Copenhagen area Sunday, raiding an Internet cafe and taking away two people, possibly under arrest.
Police are currently working under the assumption that the man was acting alone when he carried out the twin shootings.
A 55-year-old man was killed when the attacker opened fire on a cultural centre hosting a debate on freedom of speech on Saturday afternoon. In the second attack, the gunman killed a 37-year-old Jewish man outside Copenhagen's main synagogue.
Five police officers were also wounded in the two attacks.