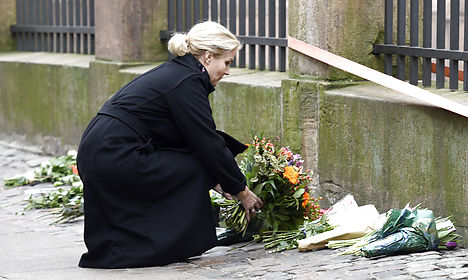 PM Helle Thorning-Schmidt pays her respects in Copenhagen. Photo: REUTERS/Fabian Bimmer/Scanpix
Outside Copenhagen's main synagogue a young woman in tears placed flowers at the gates where people gathered Sunday in a mood of fear and defiance after a lone gunman claimed two lives in their city.
The grieving residents stood with their arms around each other in a sad solidarity as they remembered one of the victims, a 37-year-old member of Denmark's small Jewish community, who was killed outside the synagogue shortly after midnight as a bar mitzvah was being celebrated inside.
The shooting came just hours after a 55-year-old man died when the same gunman attacked a cultural centre where a debate on Islam and free speech was taking place.
"It feels less safe, especially in the Jewish community. I came in solidarity. Everyone is blasting the Jews, and then we hit them as they celebrated bar mitzvah," a 65-year-old man who gave his name as Liebecke told AFP.
As Copenhagen woke on Sunday morning to the news of both the second shooting and the killing by police of the gunman believed to be responsible, people reacted with mixed emotions.
Denmark has prided itself for decades on being one of a tiny number of nations that were able to save the majority of their Jews during the Nazi Holocaust.
For some in the city, the events of the weekend are a reminder that they are not immune to the scourge of violent extremism such as the January attacks in Paris that killed 17 people including four at a kosher supermarket.
"It's terrible. It's an attack on the free world," said 84-year-old Jørgen Johanssen. "Fortunately, this morning there were a lot of police."
On a chilly February day, Kristian and Camilla, both 44, said they had made a point out of maintaining their habitual Sunday promenade with their young children.
"We live here in the centre, and we do not intend to change our routines. But from what has happened it is now clear that there is an awareness that everyone can be affected," Kristian said.
Tobias Hansi, a 19-year-old street vendor, called the situation "scary." But then he added, apparently reassured: "The police did a good job."
"We don't expect these types of events, but we know they can happen," added Jens, a  psychologist. A man places a Danish flag next to flowers for the shooting victims outside the Kruttønde cultural centre in Copenhagen on Sunday. Photo: Claus Bjorn Larsen/Scanpix
'Attack on the free world'
Nearly a decade ago, Danes saw the anger that could be caused by cartoons considered to have insulted the Prophet Mohammed.
Protesters as far apart as Palestine, Afghanistan and Nigeria torched the red-and-white national flag after the publication of 12 cartoons of the Prophet in the Danish daily Jyllands-Posten.
The country has also had to grapple with the the problem of radicalized Muslim youths travelling to Syria and Iraq to fight.
In December, the Danish Security and Intelligence Service (PET) published estimates that at least 110 jihadists had gone from Denmark. Sixteen of them lost their lives — but others have returned.
Danish Prime Minister Helle Thorning-Schmidt also came to the synagogue to express her condolences to the mourners there, assuring them that the country has beefed up security.
Emma, a 20-year-old waitress in a cafe on the corner of the street housing the synagogue, said she had been fearful that attacks could eventually be seen on home turf.
"In a sense, we were prepared. We talked about it not so long ago, saying that with the proximity of the synagogue, it could happen there in the street," she said.
"But of course, we did not really believe it."