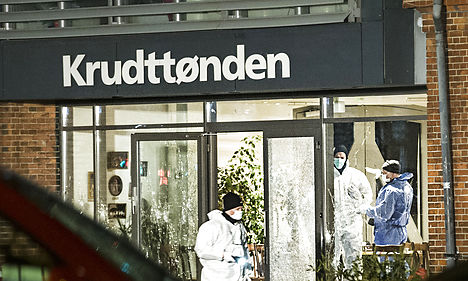 Photo: Martin Sylvest/Scanpix
One man was killed and three police officers were wounded when a gunmen attacked a cultural centre hosting a seminar attended by the French ambassador and Lars Vilks, a Swedish cartoonist who has faced threats over his depictions of the Prophet Mohammed.
See also: Terror suspected in Copenhagen cafe shooting
"They targeted an artist and also France," columnist Patrick Pelloux told AFP. "We must fight fascism at all costs. We are all Danish tonight."
Pelloux narrowly escaped the attack by two Islamist gunmen on the Paris offices of Charlie Hebdo on January 7, which left 12 people dead and kicked off three days of jihadist violence in the capital.
The satirical weekly had repeatedly been threatened over its publication of Mohammed cartoons.
Pelloux arrived at the offices just three minutes after the shooting because he was attending a meeting in his other job as head of France's emergency room doctors' association.
"It's horrible because it's one month after the Paris attacks, it brings back all the sadness," Pelloux said about the Copenhagen attack. "This confirms what others have said, that fundamental fascists are waging a war on culture."
He urged artists not to succumb to self-censorship out of fear. "We must stand firm and not be afraid," he said.
Neither French ambassador to Denmark Francois Zimeray nor cartoonist Vilks were hurt in Saturday's shooting.
Url copied to clipboard!