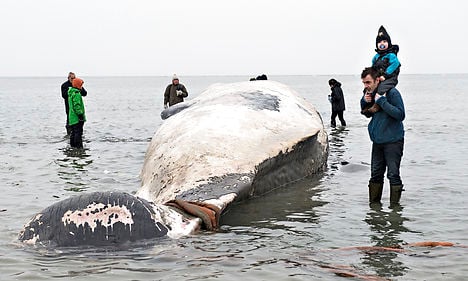 The whale has generated a lot of interest from local residents. Photo: Claus Fisker/Scanpix
Work to remove the corpse of a 20-tonne sperm whale stranded on the island of Fanø got underway on Friday.
The whale, which upon closer inspection was reported as being 15 rather than 12 metres long, washed up on Fanø on Wednesday and was moved onto dry land on Thursday.
On Friday, the corpse was cut into one tonne pieces to make it easier to remove from the beach.
Public broadcaster DR was there for the unique – and frankly a bit gross – project and spoke to backhoe operator Michael Baun, who said his strange work day was “definitely more fun than it is pretty” and local boy Mikkel who, perhaps rather unsurprisingly, thought it was “really cool” to see a dead whale chopped up into pieces.
DR reporter Sif Vesterløkke, meanwhile, delivered an admirably straight-faced report despite her saying that the whale “smells extremely bad”.
Here’s the video, courtesy of DR:

Just in case you can't get enough of this sort of thing, you can read about a dead whale that washed up on a French beach in November, seven whales that were stranded on an Italian beach in September and a happier story out of Sweden, where a whale was able to fight itself free after a five-hour struggle just before Christmas.

And who could forget this video from 2013 showing the explosion of a dead whale in the Faroe Islands that so vividly demonstrates the dangers of approaching a whale carcass: