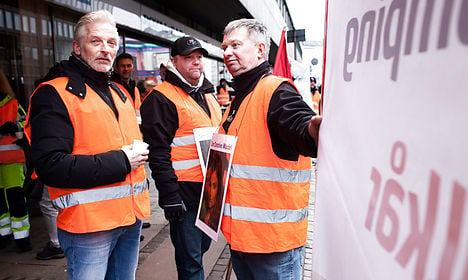 Protesters wore photos of Danish supermodel Helena Christensen in response to a quip from Ryanair's commercial manager. Photo: David Leth Williams/Scanpix
The Danish Confederation of Trade Unions, LO, announced last week that it has filed a case in the Danish Labour Court (Arbejdsretten) to determine whether Ryanair should operate under Irish or Danish rules from the Copenhagen base. LO said that if the so-called ‘recognition proceedings’ determine that Ryanair must follow Danish rules, the decision will clear the way for a blockade that would bar members of unions including 3F, Dansk Metal and HK from doing work for Ryanair.
Such a move make it “nearly impossible” for the airline to handle baggage or receive fuel deliveries, DR reported.
In Copenhagen on Thursday, Ryanair’s personnel director Eddie Wilson said that if the blockade comes the company would drop its plans to use the Danish capital as a base and instead just use it as a destination, brining in flights and manpower from other European bases.
“That is naturally not our preferred solution, but if we are met with an illegal blockade, then we are ready to drop Copenhagen as a base. That will mean a loss of good jobs in Copenhagen but that is the unions’ fault. We will still fly in and out of Copenhagen though,” Wilson said as quoted by public broadcaster DR.
In addition to LO’s case in the Labour Court, the Danish Flight Personnel Union (Flyvebranchens Personale Union – FPU) has warned that it will fight Ryanair’s entry into Copenhagen because the company has refused to enter into a collective bargaining agreement.
Ryanair said that company representatives would meet with FPU reps to clear up the “many misunderstandings” around the company’s plans.
“We just want to explain to the Danish labour unions that Ryanair is a company with good employee conditions, that we negotiate directly with employees and that our presence in Copenhagen will create many new jobs,” he said.
Ryanair also used the press conference to announce that it will also offer a Copenhagen-Dublin route, which it rolled out by selling tickets for just €0.30 for flights between March 18th and May 21. Those ultra-low prices only lasted three hours, however.
The airline also said that it would begin its Copenhagen routes on March 18th, a week earlier than originally planned.
Outside the press conference on Thursday, Danish labour union members protested against Ryanair with photos of Danish supermodel Helena Christensen taped to their chests. The photos were in response to a quip from Ryanair’s commercial manager David O’Brien at a January press conference, in which he asked if the “Danish model” referred to the former Victoria's Secret Angel.