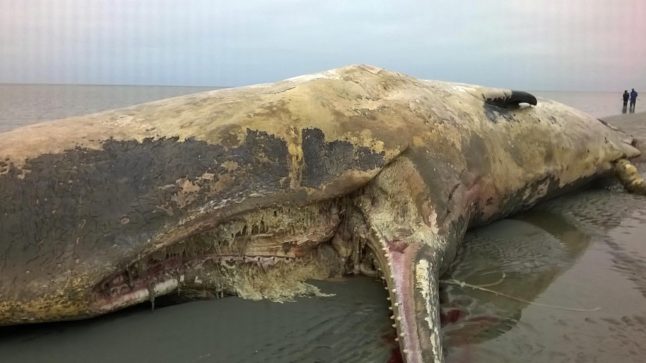 It could days or even weeks to remove the whale, the Danish Nature Agency said. Photo: Fiskeri- og Søfartsmuseet
The rotting corpse of a 12-metre-long sperm whale has washed up on the shore of the Danish island Fanø, local police said on Wednesday.
The massive creature was naturally garnering attention, but the Danish Nature Agency (Naturstyrelsen) warned that curious onlookers should stay away from the whale, which it characterized as “a bacteria bomb”.
“Experience from previous whale strandings shows that many people want to go up and touch the dead whale, but it can be deadly as dead whales are often indicted with pathogenic bacteria,” the Nature Agency wrote on its website.
The nature officials said that tests would be performed on the whale to determine its cause of the death and the Fisheries and Maritime Museum in Esbjerg will attempt to determine if the whale’s skeleton can be preserved for future display. But first the whale has to be moved, and that will be no easy task.
“The sperm whale is laying solid in the water and can first be pulled onto land on Thursday,” Southern Jutland Police wrote on Twitter.

The Nature Agency said that it could take days or even weeks to remove the whale from the area.