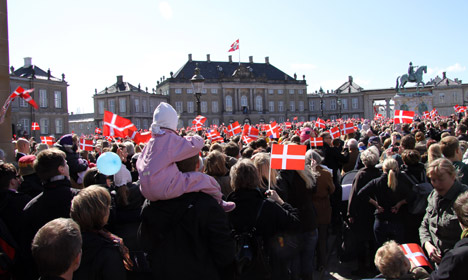 A record number of people entered the Danish fold in 2014. Photo: Colourbox
New figures from Statistics Denmark show that nearly 65,000 foreigners moved to Denmark in 2014, an all-time record for the highest number of immigrants in a single year. The 64,874 foreign nationals who came to Denmark last year represented a 15 percent increase over 2013, which held the previous record.
Although the largest single group of immigrants were the 5,377 Syrians who came to Denmark, the record 40,059 immigrants from Western countries far outpaced the 24,815 who came from non-Western countries.
See also: Half of Danish resident permits go to EU citizens
The number of Western immigrants in Denmark has grown rapidly, having more than doubled since 2004 and increasing fivefold since 1984.
Tiny Maerschalk, the head of the Aarhus-based expat network International Community, said she wasn’t surprised to see such a sharp rise in Western immigrants.
See also: US citizens get 1 in 8 Danish resident permits
“Companies in Denmark need certain skills that they can’t find within the country, so they need an extra inflow from abroad,” she told The Local.
Maerschalk said that despite the often negative tone that surrounds the topic of immigration in Denmark, both employers and foreign workers benefit from the growing number of Western immigrants in the country.
“Studies have shown that immigrants working in Denmark contribute to the economy and bring new experiences and knowledge that help Danish companies become more competitive. And those companies have worked hard to make sure that it is easy for highly-skilled foreigners to come here," she said.
See also: 8 out of 10 expats satisfied with Denmark
Maerschalk told The Local that the International Community hears mostly positive feedback about living and working in Denmark from its more than 3,000 members in the Aarhus area.
“Highly-skilled immigrants working and living in Denmark are quite positive about the country and they are quite happy working here.  One thing we hear a lot is that the work-life balance leaves a lot of time for workers’ personal and family lives,” she said.
In addition to the 40,059 Western and 24,815 non-Western immigrants who came to Denmark in 2014, 21,809 Danish citizens returned to the country. At the same time, 20,123 Danes, 21,817 Westerners and 7,278 non-Westerners left Denmark.
Behind Syria as the countries that produced the most immigrants in Denmark were Romania, Poland, the United States and Germany.