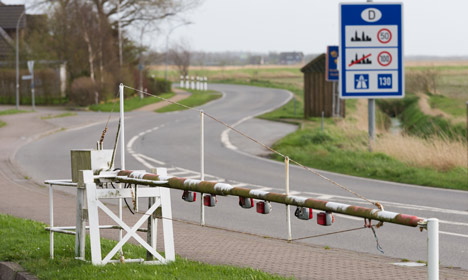 61 percent of Danes want to put these back into permanent use. Photo: Colourbox
When voter support for the Danish People’s Party (DF) reached an historic high in November, it sent shock waves through the Danish political system.
But recent opinion polls on two key DF positions indicate that the party is more in tune with Danish voters than the political establishment might believe.
A poll from last week indicated that every second Dane thinks there should be a limit to how many Muslims live in Denmark, a standpoint right in DF’s wheelhouse.
On Monday, a new poll revealed that voters overwhelmingly agree with another key DF issue: increased border controls.
An Epinion poll conducted for public broadcaster DR showed that 61 percent of Danes are either completely or partially in agreement that Denmark should institute permanent border controls, including gates and guards.
DF, which used its position as the previous Venstre-Conservative government’s support party to successfully push for enhanced border controls in 2011, was ecstatic over the poll results.
“It is outstanding that a clear majority of the Danish population actually supports what the Danish People’s Party has proposed and in fact supports it even more, because we didn’t say there had to be border gates,” DF spokesman Peter Skaarup told DF.
While DF successfully got the previous government to go along with its calls for enhanced border controls in May 2011, the former government’s defeat at the polls four months later led to the plans being scrapped by the current Social Democrat-led administration. But DF said that increased border controls will be “high on its wish list” if the keys to the prime minister’s office once again switch hands in an election that must be called no later than September of this year.
DF said it would push for the border checks even if it meant that Denmark would violate the terms of the Schengen Agreement.
“The Danish People’s Party could definitely suggest that we take a part of the Schengen [Agreement] out and say that when it comes to border controls we want to decide. And if Schengen blocks us from doing that, well we’ll just push it through anyway,” Skaarup said.
Increased checks at Denmark’s borders is far from just a right-wing issue, however. The current centre-left government announced in October that it will give Danish police more authority to stop vehicles at the border and check arriving passengers at Denmark’s airports.
“We won’t accept people coming to Denmark to commit crimes and we want to send a strong signal that those types of people aren’t welcome,” the then justice minister, Karen Hækkerup, said at the time.
READ MORE: Denmark to strengthen its border controls