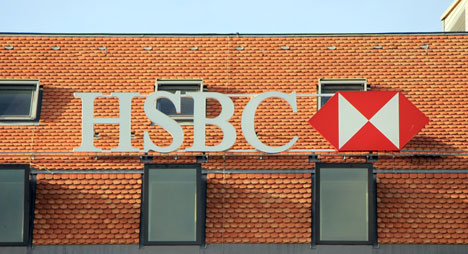 A data cache of leaked secret bank account files, obtained through international collaboration between news outlets including Danish newspaper Politiken and the Washington-based International Consortium of Investigative Journalists (ICIJ), reveal that HSBC's Swiss private bank helped customers – including more than 300 Danes – conceal more than 666 billion kroner ($120 million) in secret bank accounts between 2006-2007.
Since September 2014, the ICIJ has analyzed the data leaked in 2007 by Hervé Falciani, a former IT worker at HSBC in Geneva, who fled to France.
Described as the biggest banking leak in history, the information includes details of 30,000 accounts with total assets of around $120 billion. Among the accounts were over 300 Danes who had a combined 4.8 billion kroner (over $730 million) in HSBC between 2006-2007.
Read more from The Local Switzerland: HSBC Swiss bank 'aided terrorists and crooks'
The French government was given the leaked information in 2009 and passed on details of clients at the bank who were evading taxes to other countries, including Argentina, Belgium, Greece, Spain, the US and the UK. Although the Danish government could have also received the list, Politiken reports that tax authority Skat did nothing.
The tax minister, Benny Engelbrecht, said he couldn’t understand why his predecessors didn’t act.
“Quite honestly it is inexplicable that there was a decision to not get the information at the time that it was made available to other countries. It should have been the most natural thing in the world,” he told Politiken.
Skat director Jesper Rønnow Simonsen could also offer no good explanation for why the Danish authorities failed to act.
“I also wonder about that. But now I’ve asked to have it investigated and to have action taken,” Simonsen told Politiken.
For much more on how HSBC’s private bank in Switzerland catered to clients seeking to evade taxes, including those involved in money laundering, financing terrorism and drugs and arms trafficking, visit The Local Switzerland.

PARTNER CONTENT
Five reasons to meet up in Geneva in 2019