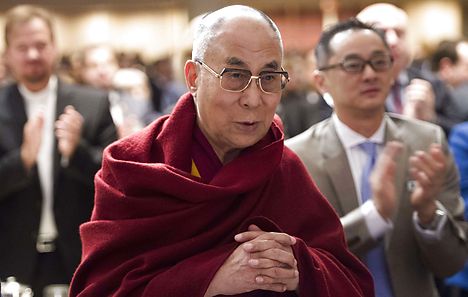 The Dalai Lama attends the National Prayer Breakfast in Washington, DC on Thursday. He will be in Copenhagen on Wednesday. Photo: Saul Loeb/AFP/Scanpix
The Dalai Lama will be in Copenhagen this week for two days of teachings on peace, tolerance and compassion.
But the exiled Tibetan spiritual leader’s visit to the Danish capital on Wednesday and Thursday will be free of any official meetings with Danish leaders.
Prime Minister Helle Thorning-Schmidt has declined to meet with the Dalai Lama despite previous promises that she would.
Foreign Minister Martin Lidegaard will also steer clear of the Dalai Lama, saying that the Tibetan leader never formally requested a meeting.
See also: China 'loves' Helle Thorning-Schmidt
The PM has avoided commenting on the Dalai Lama’s visit, but politicians of both sides of the aisle have had plenty to say about it, especially in light of the fact that before coming to power Thorning-Schmidt promised to meet with him if she became prime minister.
“Of course I would meet the Dalai Lama,” Thorning-Schmidt said in a 2007 book written by her current spin doctor Noa Redington.
Two years later, when Danish PM Lars Løkke Rasmussen met the Dalai Lama, Thorning-Schmidt criticised her predecessor for saying that the meeting was “private” and not in an official capacity as PM.
“He should meet with the Dalai Lama as prime minister,” Thorning-Schmidt said after the May 2009 meeting.
Despite its “private” nature, Løkke Rasmussen’s 2009 meeting damaged Denmark’s relationship with China, which considers the Nobel Peace Prize recipient to be a separatist.
China put its diplomatic relations with Denmark on ice, cancelling ministerial visits and high-level political contact. It wasn’t until months later, at the COP15 climate talks in Copenhagen, that the Danish government was able to get back into China’s good graces by formally declaring that it recognizes China’s sovereignty over Tibet.
Thorning-Schmidt’s change of heart on a meeting with the Tibetan leader has been attacked from both right and left.
Venstre’s Søren Pind called the failure to meet “a broken promise” while Nikolaj Villumsen from the left-wing Red-Green Alliance (Enhedslisten) called Thorning-Schmidt’s decision “deeply embarrassing and hypocritical”.
Lidegaard has also been criticised for failing to meet with the Tibetan leader when members of his own political party calling the failure to meet “reprehensible” and “frustrating”.
The Dalai Lama’s visit to Copenhagen comes at a time when Denmark is working hard to strengthen its economic and cultural ties to China. Thorning-Schmidt visited China in September to promote business relations between the two countries, while Culture Minister Marianne Jelved visited the nation in November as part of the “largest Danish cultural effort in China to date”.
Prior to Løkke Rasmussen’s 2009 meeting, two other Danish PMs have met with the Dalai Lama: Poul Nyrup Rasmussen in 2000 and Anders Fogh Rasmuseen in 2003.
Details on the Dalai Lama's two-day event in Copenhagen can be found here.