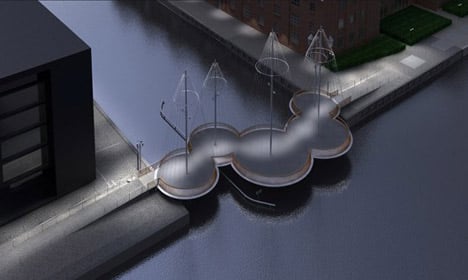 City officials now say that Cirkelbroen will open by the end of this year. Illustration: Olafur Eliasson
World-renowned artist Olafur Eliasson’s circular bridge will open in Copenhagen by the end of this year, city officials said this week.
The delayed project will give cyclists and pedestrians a new and more direct way to cross Christianshavn Canal and is part of the city’s overall plan to make getting around Copenhagen’s inner harbour area easier.
Story continues below the map.

“For many years it has been a goal for the City of Copenhagen to create an entire boardwalk along the inner harbour. The southern mouth of Christianshavn's Canal forms the ‘missing link’,” the Nordea Fund, which is financing the bridge, says in its project description.

The 32-metre long swing bridge will be made up of five staggered circular platforms. The different-sized platforms all have their own masts and three of the five circles will be movable in order to make way for large boat traffic.
The project has been hit by numerous delays since its announcement in 2011 but construction is now well underway and city officials released a new local plan this week that said the bridge will open by the end of 2015.