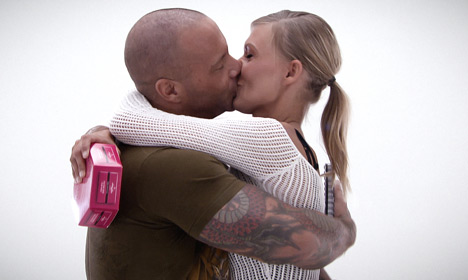 Go on, do something nice for Valentine's Day. It'll make you both feel better. Photo: Anthon Berg
A YouGov opinion poll from January revealed that only two percent of Danish men like to celebrate Valentine’s Day. Not only is that bad news for the Danish women who might like to receive a little token of love on February 14th, it’s also bad business for Danish chocolate company Anthon Berg.
So in the hopes of getting more Danish men to embrace the holiday – and to sell a few more boxes of chocolates in the process – the Danish company decided to bring an American neuroscientist to Denmark to conduct a “scientific love experiment” expanding on the theory that acts of generosity increase oxytocin levels and thus love and happiness.
”Anthon Berg wanted to dig deeper into the generosity issue to uncover what it actually does to human beings. Specifically what it does to a man when he is being generous and his partner reacts positively to it. The only reasonable way to go about it is the scientific way. So it was very relevant to invite the well-known neuroscientist Paul Zak to Denmark in order to make a scientific experiment show us the reality of it,” Rikke Crown, a senior brand manager for Anthon Berg, said.
In an “experiment that has never been done before”, Paul Zak, a professor of neuroeconomics at the Claremont Graduate University, who is also known as ‘Dr. Love’, brought in 32 Danish couples to test what happens to a man’s oxytocin levels when he expresses love for his partner.
Zak said that oxytocin is sometimes referred to as “the love molecule”.
“Oxytocin makes us happier, increases erections and produced more powerful orgasms. This is really powerful stuff,” he said.
The experiment found that the levels of oxytocin in the blood of the male participants increased by 27.5 percent after they vocalized their love for their partners. According to Anthon Berg, studies have shown that oxytocin levels in brides on her wedding day go up by 28 percent, or just 0.5 percent more than the male participants in the experiment.
Zak said that the results prove that Danish men should embrace Valentine’s Day, or at least the concept behind it.
“If you claim not to like Valentine’s Day, the blood proves it will make you happier. And if you still don’t like it, fair enough. Do it some other day,” he said.
Not everyone agrees with Zak’s claims about oxytocin. In fact, some scientists say the hormone increases envy, bias and gloating rather than love and happiness. But after watching the results of the tear-jerking experiment below, you may want to be on the safe side and buy that box of chocolates after all. Or at least tell your partner you love them.