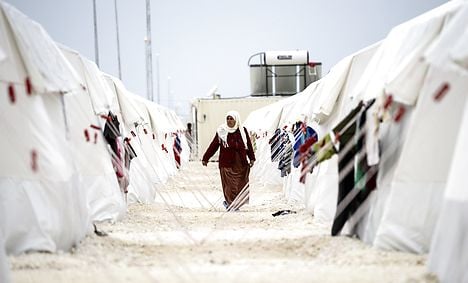 A Syrian Kurdish refugee walks in a UNHCR (United Nations Refugee Agency) refugee camp in Suruc last week. The top UNHCR official has called on all European nations to accept more refugees. Photo: Bul
On the same day that the Danish parliament discussed its criticised tighter restrictions on asylum seekers, the UN high commissioner for refugees (UNHCR), Antonio Guterres, was in Stockholm calling on the EU to force its nations to more equitably handle a spike in asylum seekers.
"We are ready to support political initiatives within Europe, for instance, aiming in some situations to have forms of quota distribution," Guterres told reporters on Tuesday.
He said that while asylum seekers generally enter Europe through Greece and Italy, nearly half of all asylum requests last year were presented in Germany and Sweden, a sign of the continent's lopsided distribution.
The rush of refugees into Europe comes as the number of people driven from their homes by conflict and crisis topped 50 million, a first since World War II, according to the UNHCR.
Many refugees choose to seek asylum in northern Europe rather than following EU immigration rules and applying where they first arrive. Sweden has already called on other EU states to take a greater share of refugees.
Denmark saw its number of asylum seekers nearly double in 2014, but the 14,815 people who sought asylum in Denmark was a far cry from the more than 80,000 asylum seekers processed by Sweden.
As Europe struggles to keep up with the influx, Greece and Italy have complained that they lack the capacity to deal with rising numbers arriving by boat, with human rights groups criticising both countries for "push-backs" of migrants legitimately seeking asylum.
"Something is wrong in the way the system is working," said Guterres, a former Portuguese prime minister, calling for "a European solidarity mechanism".
"Quota systems are always an extreme solution," he added. "Ideally, the system would work naturally to produce a fair share among European countries."
Sweden receives the highest number of refugees per capita in the EU and is second only to Germany as a destination for Syrians fleeing the four-year war in their home country.
Denmark’s plans to make asylum temporary for Syrian refugees and to limit their ability to bring family members to the country under family reunification have been criticised by the United Nations Refugee Agency and a long line of human rights organisations.
Danish politicians have previously expressed strong concerns that Sweden’s generous asylum policies will affect Denmark, as citizenship agreements between Nordic nations allow refugees who obtain Swedish citizenship to move to Denmark without a Danish resident permit.