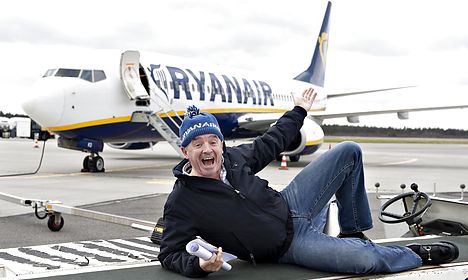 Ryanair head Michael O'Leary was all smiles when his airline opened up in Aarhus (pictured) but the foray into Copenhagen is proving trickier. Photo: Henning Bagger/Scanpix
The Danish Confederation of Trade Unions, LO, has filed a case in the Danish Labour Court (Arbejdsretten) to determine whether Ryanair should operate under Irish or Danish rules when it begins flying out of its new Copenhagen base.
Ryanair’s personnel manager Eddie Wilson last week rejected the notion that the airline should have to play by Danish rules.
"Our employees' relationship is with Ireland, so the Danish model, as much as the German model, or the Russian model, just doesn't apply," Wilson said at a Copenhagen press conference.
LO, the nation’s largest national trade union confederation, says that if the so-called ‘recognition proceedings’ determine that Ryanair must follow Danish rules, the decision will clear the way for a blockade. Public broadcaster DR reports that Ryanair has already lost similar cases in France, Norway and Belgium.
A blockade from LO would mean that members of unions including 3F, Dansk Metal and HK would be barred from doing work from Ryanair, which according to DR would make it “nearly impossible” for the airline to handle baggage or receive fuel deliveries.
In July of last year, Denmark signed a double taxation treaty with Ireland to ensure Danish citizens who work for Irish-registered airlines are taxed in their home country.
A Ryanair spokeswoman told DR that the airline wouldn’t comment on the looming Danish Labour Court case, but stressed that the company would create Danish jobs when it formally begins operations from its Copenhagen base on March 26th.
“We look forward to rising tourism, more routes and jobs in Denmark and offering Danish consumers and visitors the lowest ticket prices when our new base in Copenhagen opens in March,” Elina Hakkarainen said.