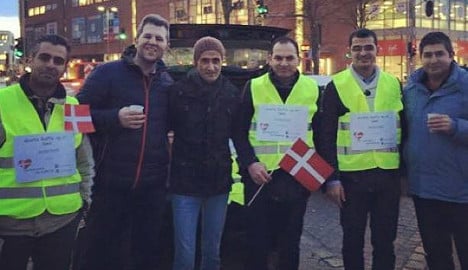 Mohammad Sharaa, Samih Alnakawah and other members of Syrian Touch at Aalborg's J.F. Kennedys Plads. Photo: Facebook
Mohammad Al Sharaa, 32, and seven Syrian friends, met commuters with hot coffee between 7am and 8am on Monday.
“It was great. Everyone was smiling,” Al Sharaa told The Local on Monday morning. “They were surprised with this idea. A lot of people asked, ‘why are you doing this thing?’ and we told them, 'just to say thank you. Thank you for your hospitality. Thank you for your warm welcome.'”
Al Sharaa said that the group, Syrian Touch, handed out its first coffee as an experiment on January 19th. They now plan to hand out coffee every Monday, with the eight members each contributing a small amount of money to fund the gesture.
Al Sharaa said that he had been surprised at the level of help he had received since arriving from Syria last June.
“The municipality is helping us with a lot of programmes to help us find jobs and get into the labour market, and we go to language school, four days per week,” he said.
He rarely encountered anti-immigrant or anti-refugee sentiment.
“Actually, we find great hospitality here in Denmark. We find a warm welcome. We don’t find the other side which people talk about.”