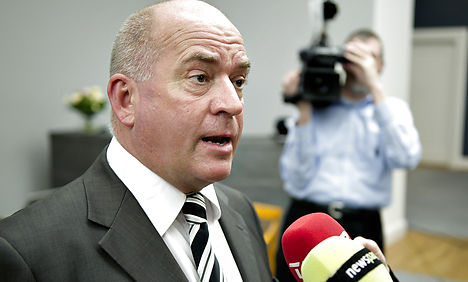 DF's Søren Espersen brushed off the poll results. Photo: Keld Navntoft/Scanpix
For more than one in eight Danish voters, the hardline approach to immigration from the Danish People’s Party (DF) is not hard enough.
In a poll carried out for Jyllands-Posten newspaper this week, 13 percent of respondents said they wished there was a party that would push for an even harder immigration policy than DF.
Among so-called ‘blue bloc’ voters – i.e. supporters of Denmark’s right-of-centre opposition parties – one in five said they want a party that would push a tougher immigration line than DF.
The poll results came in the same week that the populist movement Pegida, which opposes what it calls 'Islamization of the West', made its Danish debut. Many have questioned whether Pegida can find a footing in Denmark given that DF already gives anti-immigration voters a political home.
Although 13 percent of voters said they want a party to the right of DF, recent experience suggests otherwise. The nationalist Danes’ Party (Danskernes Parti) put forth several candidates in the November 2013 municipal elections but not a single one was voted in. Still, the 17,419 votes received by the far-right party were 5,180 more than in the municipal election of 2009.
Rather than needing to fear that a party will come in from the right, many political analysts said that the new Jyllands-Posten poll could actually strengthen DF.
“I think that the Danish People’s Party is very satisfied with that poll even though nearly 13 percent say that they wish there was a more immigrant-critical party. Because when the voters stand there in the ballot booth, there is only DF to vote for. It’s grist for their mill as long as there aren’t any other alternatives out there,” Troels Mylenberg, the editor-in-chief of local newspaper Fyns Amts Avis, told Ekstra Bladet.
DF themselves certainly didn’t seem worried about the poll results.
“We are who we are and we do what we do. If someone doesn’t like it, they can vote for another party,” party spokesman Søren Espersen told Jyllands-Posten.
DF, which for a decade used its position as the government’ support party to move immigration policies to the right, has had the wind in its sails as of late. The party has consistently polled higher than the 12.3 percent voter support it received in the September 2011 elections and a November 2014 poll was the first ever in which DF came out with the highest level of support.