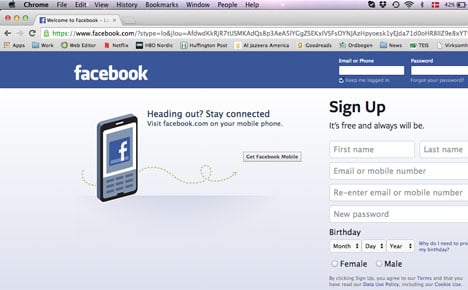 Facebook comments have put a 31-year-old in a psychiatric treatment.
A mentally ill man has been sent to a locked psychiatric ward for making Islamist threats on Facebook.
The 31-year-old Danish man with Georgian roots was ordered jailed for four weeks for his comments but because of his mental illness he will be sent to an undisclosed psychiatric facility. The man has previously been convicted for making terror threats.
See also: Danish neo-Nazi jailed for Islam insults
The majority of the man’s appearance at a Frederiksberg courthouse was held behind closed doors but according to media reports the man, who has connections to known Islamists including the recently-convicted Said Mansour, wrote the following threats on his open Facebook page:
“I want to kill.”
“I want to slaughter infidel swine.”
“Being a terrorist is better than being a blasphemer.”
“My heart beats with lust to kill the enemies of Allah.”
“Denmark is in an alliance with the USA. Therefore, war against Denmark is the obligation of every Muslim.”
The 31-year-old’s lawyer argued unsuccessfully that his client’s Facebook remarks should not be construed as threats.
“This is not an invitation to terror but an expression of personal thoughts,” the defence lawyer, Peter Hjørne, said in court according to Politiken.
Police will continue their investigation into the case while the man is admitted for psychiatric treatment.
This is far from the first time that a person's Facebook remarks have landed them in legal trouble. On Monday, a Danish man was jailed in Austria for insulting Islam and praising Nazis on Facebook while earlier this month, the spokesman for the organization Called to Islam (Kaldet til Islam) was cited for cheering the Paris terror attacks on Facebook and the aforementioned Mansour was convicted on terror charges for the second time for posting screeds, photos, links and messages online that praise Osama bin Laden and call on his readers to join al-Qaeda’s al-Nusra front.