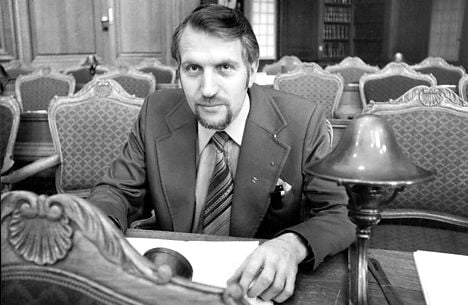 Uwe Jensen was elected into the Danish parliament in 1977. Photo: Mogens Ladegaard/Scanpix
78-year-old Uwe Jensen has had many titles throughout his long life: Danish MP, UN delegate, MEP, weapons seller, drug dealer, terrorist, prisoner. On Friday, he could add a few more to his varied CV: free man, ex-con.
Jensen was released from a prison in Houston, Texas after serving 12 years for his role in a weapons-for-drugs deal.
He was arrested in 2002 and imprisoned in 2006 for his plans to smuggle four containers filled with weapons to the paramilitary group the United Self-Defense Forces of Colombia (AUC), which has been designated as a terrorist organization by both the United States and Europe.
The weapons were to be bought with $25 million worth of cocaine in what the FBI said was “the use of drug money to fuel terror”.
According to the FBI’s case against Jensen, the Dane wanted to move a shipment that consisted of 300,000 grenades, 300 guns, 9,000 AK-47 rifles and millions of rounds of ammunition.
Jensen was busted by an undercover FBI agent who had befriended the former Danish politician and followed his movements for over a year.
Upon his release on Friday, Jensen denied his guilt and told Ekstra Bladet that the entire business was a set-up by the FBI.
In the FBI’s official telling of the case, which it dubbed ‘Operation White Terror’, it says that Jensen was the one who came to them.
“Just four days after the 9/11 attacks, a man named Uwe Jensen approached one of our confidential sources and learned that our source had connections in Eastern Europe that might lead to the purchase of huge stores of military weapons for the AUC. Jensen—a naturalized U.S. citizen from Denmark living in Houston – was a weapons scout for [Carlos Ali] Romero-Varela,” the FBI writes on its website.
Although Jensen gave up his Danish passport to become an American, his time behind bars clearly soured his outlook on the US.
“[The US] is a police state that treats its people worse than Nazi Germany,” he told Extra Bladet outside of the Houston holding facility.
Jensen will spend the next five years on parole, and said he hopes to be able to serve that time in Denmark.
“Denmark is still my country,” he said.
Jensen released a book last year about his ordeal.