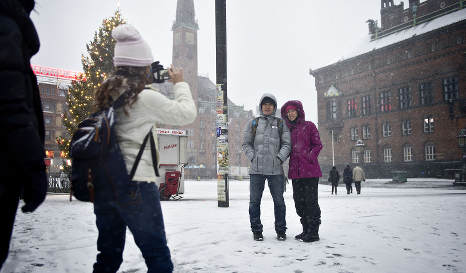 Photo: Torkil Adsersen/Scanpix
Extremely cold Siberian winds are on Tuesday expected to cross the waters of the Kattegat and western Baltic, where water temperatures are now three degrees warmer than normal.
This could lead to a Danish version of the US’s ’Lake Effect’, which sees freezing Arctic wind pick up vast quantities of water vapour as it crosses the Great Lakes, and then deposit it as freak snowfall on the downwind shores of the United States.
“We hardly ever get metre-deep snow in Denmark nowadays, but it has happened historically," DMI’s Mogens Rønnebek wrote in a press release. "A very good example is 'Winter War 1978-1979. If you’re a snow lover, it will be really exciting to follow the DMI weather over the coming days.”
The heaviest snowfall is expected to hit the coasts of northern Zealand and the west Jutland, with less severe snowfall possible across the rest of Denmark.
In the winter of 1978-1979 snow was so deep that trains were cancelled and airports closed across Denmark, while the Danish Army was mobilised to rescue trapped families.
Here is DMI's diagram of how the 'Lake Effect' works: