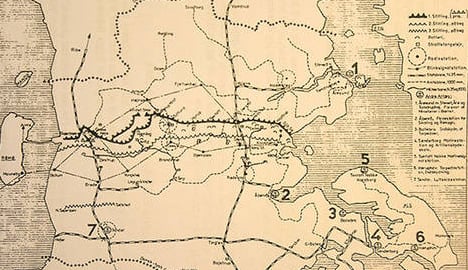 A map of the defence line. Source: Danish Agency for Culture
The Northern German Defence Line, which stretches from close to the city of Aabenraa to the island of Rømø on Denmark’s west coast, was built by the Imperial German Army between 1916 and 1918 to prevent a planned British operation to seize the Kiel canal and trap the German fleet in the Baltic.
At the time, Germany controlled North Schleswig, the area now known as South Jutland, as a result of its 1864 victory against Denmark in the second Schleswig War.
The 900 bunkers, 40 artillery batteries and connecting trenches and barbed wire were built along a 50km stretch using military convicts and German criminals taken from prisons between 1916 and 1918.
They were never put to the test, however, and when Denmark recovered South Jutland following Germany’s 1918 surrender, the Danes attempted to destroy the line.
"The defences faced the wrong way and they're about 50 km north of the German border," explained Martin Bo Nørregård, chairman of the society for preserving these fortification line. "In the First World War, they did turn bunkers around, block off the old entrance and open a new entrance. But the Danish military didn’t feel this was feasible, so in order to prevent the Germans coming back again and using the line, they decided to blow them up."
Many of the bunkers survived, however, either because they were overlooked or were located too close to farms and residences to be blown up responsibly. This means that the fortified line from World War I is the best preserved in the world.
The Danish Agency for Culture has now began moves to preserve the surviving fortifications for future generations.
"The work has jut started," Nørregård said. "The Danish Agency for Culture has started a project to try to list the sites, and to tell the owners of the land that they're not allowed to damage the bunkers. We have had instances in the last three years of bunkers being destroyed, so I think it’s quite nice that they’re finally taking this in hand, so that it’s not destroyed. It’s part of the history of Southern Jutland.”
Trees have now colonised many of the fortifications

Here is a photo of a gun battery in Rubjerg, one of 30 along the line.
Here is the inside of one of the bunkers, the metal long rusted away.
Here is the battery at Gammelskov.