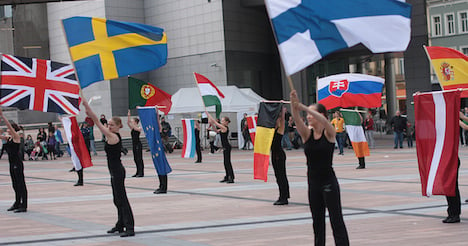 Some of the stats are predictable: it is perhaps unsurprising that Swedes and Swiss earn more than Italians and Spaniards, while the number of people claiming unemployment benefits has fallen over time in Sweden and Germany, while rising in France, Spain and Italy.

The Nordic countries also do well when it comes to income inequality, with Sweden and Denmark among the most equal places in Europe. But while inequality is slowly rising in the north, Italy is slowly becoming more equal – and is already more equal than Spain and the UK. You might be surprised to learn that well-functioning, prosperous Switzerland is one of the most unequal countries in the rich-country OECD.

More surprising, perhaps is that even those countries with economic problems have seen crime fall. Indeed, crime is falling everywhere – in Austria, crime is at its lowest level since 1947. In Spain, murders were down from 364 in 2012 to 302 in 2013.

There are also some surprising differences in countries that should be quite similar. Denmark has one of the world’s highest cancer rates; next-door Sweden one of the lowest. Danes’ fondness for booze and cigarettes gets the blame.

When it comes to sex and marriage, the Catholic countries of the south are less traditionalist than you might expect. Only 3.3 Italians per 1,000 got married in 2013 – a record low. The figure was the same in crisis-hit Spain. Compare that to 4.8 in Germany, 5.1 in Denmark or 5.3 in Sweden.

And women in the north are far more likely to work – 70 percent of Danish women and 77 percent of their Swedish counterparts are in the workforce. Compare this to 54 percent of Germans and 39 percent of Italians.

Italy is also doing badly at having babies. It’s worth noting that no country in Europe reaches the 2.1 births per woman needed to keep the population steady (once immigration is taken out of the equation). The French (2.01) beat the European average of 1.58, as do the Swedes (1.91) and the Danes (1.71). Spaniards, however, had only 1.32 babies per woman; Italians 1.43. But it’s not all about money – the prosperous Swiss only manage 1.54 babies per women.

Different ways of collecting and measuring data means that not all the figures in the articles are directly comparable, but it still makes for interesting reading.

STATISTICS
Why are Danish women and men so tall?
Url copied to clipboard!