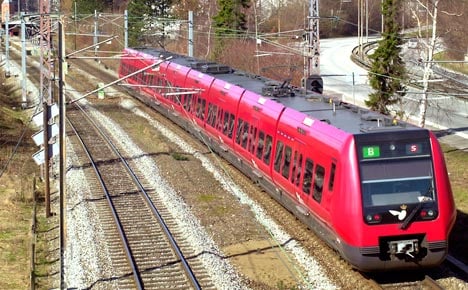 In Tuesday's fatal accident, two men were struck by an S-train outside of Copenhagen. Photo: René Strandbygaard/DSB
For the second time in less than a week, a train struck two people who were walking along the tracks in the Copenhagen area.
In the latest incident, two men were struck by an S-train between Taastrup and Høje Taastrup in Copenhagen’s western suburbs, leaving one dead and the other seriously injured.
“It was two men from Chile. One is 34 years old while the other, a 30-year-old, is the one who was killed by impact,” Copenhagen Vestegn Police spokesman Jens Møller told Ritzau.
The accident occurred just after 5pm on Tuesday, temporarily stopping traffic between the two stations. Both victims were transported to Copenhagen’s Rigshospitalet, where one was unable to be saved and the other was stabilized.
“It is a tragic accident and we are investigating it further,” police spokesman Kim Svenningsen said on Tuesday night.
Police said they did not know why the men were on the tracks nor whether they were in Denmark as tourists.
The accident came just days after a 13-year-old Afghan boy was struck and killed by a train near Copenhagen’s Amager district.
The boy’s 15-year-old friend was also injured and has now sought asylum in Denmark.