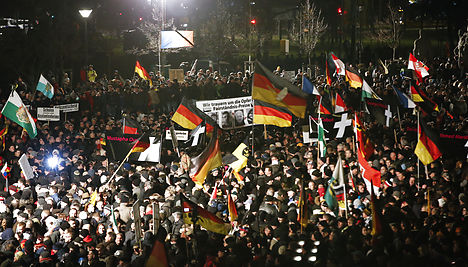 Supporters of the Pegida (Patriotic Europeans Against the Islamisation of the West) hold flags during a demonstration in Dresden on Monday. Photo: REUTERS/Fabrizio Bensch/Scanpix
The Pegida movement, which has been gathering thousands of participants in Germany every week for the past three months, is now coming to Denmark.
Pegida, which stands for Patriotic Europeans Against the Islamization of the West, will hold its first march in Denmark on Monday at 6pm in Copenhagen.
A group calling itself Pegidadk announced the march against “fundamentalist Islam” on Facebook.
“The demonstration is an opportunity for regular Danes to demonstrate their concerns about fundamentalist Islam and show their sympathies for its victims – most recently with the massacre in France,” a Pegidadk post reads.
Read The Local's interview with Pegidadk organizer Nicolai Sennels
Organisers of the event go to great lengths to paint the march as a peaceful demonstration, saying “you should stay away if you are racist, a Nazi or look ‘militant’.” The event listing also says that only the following slogans will be allowed on signs: “No to fundamentalist Islam”, “Je suis Charlie/Jeg er Charlie”, “PEGIDAdk” and “No to violence and racism”.
“We expect all attendees to behave peacefully and politely so that all can feel safe and welcome,” the organisers write.
As has been the case in Germany, Pegida’s Copenhagen march will be met by a counter demonstration.
The Pegida march in Dresden on Monday attracted 25,000 Pegida supporters and around 7,000 counter demonstrators. In other German cities, the anti-Pegida demonstrations have far outnumbered those in support of the group.
The Local Germany was at Monday’s march and reported that the Dresden Pegida organisers acknowledged its European off-shoots, including a shout-out to Pegida Denmark.
To limit the overwhelming burden on our moderators, it will not be possible to comment on this article. Feel free to join the conversation on our Facebook page. 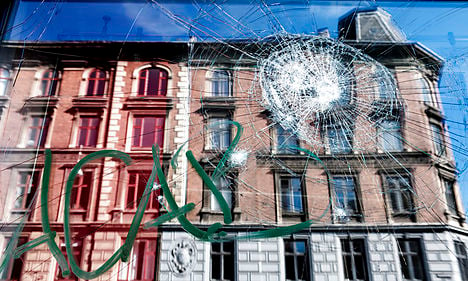 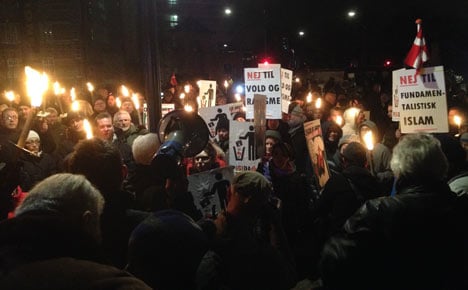