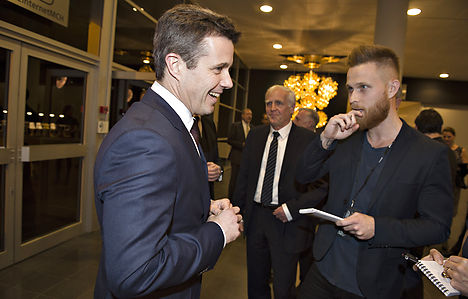 Crown Prince Frederik crossed the closed bridge to attend the Sport 2014 event at Herning's Jyske Bank Boxen. Photo: Henning Bagger/Scanpix
Crown Prince Frederik was engulfed in a storm of controversy on Monday after it was revealed that he was allowed to cross the Great Belt Fixed Link bridge while the bridge was closed to all other traffic.
The Great Belt Fixed Link (Storebæltsbroen) was closed for safety reasons as the storm Egon pounded Denmark but Crown Prince Frederik’s vehicle was allowed to cross the bridge twice so that he could attend a gala event in Herning.
See also: IN PICTURES: Double storms wallop Denmark
The director of the company that operates the bridge said it was “completely unacceptable” and “completely irresponsible” that an exception was made for Denmark’s future king.
“It is completely unacceptable that someone would allow someone, in this case the crown prince, to drive over the bridge when it is closed. I don’t understand how that could happen,” Leo Larsen, the head of Sund og Bælt, told Ritzau.
Royal vehicle broke agreement
As Egon brought hurricane-strength winds and raised water levels, the Great Belt Fixed Link was closed from 2pm on Saturday and 4am on Sunday. But security cameras revealed that Crown Prince Frederik’s vehicle, accompanied by a police escort, crossed over onto the island of Funen at 3.15pm and back onto Zealand at 2.53am.
Larsen said that he suspects that the permission to cross the closed bridge must have come from the Danish Security and Intelligence Service (PET).
“I don’t think it was the local police. It must have been PET that gave permission. It is completely irresponsible to drive over the bridge when it is closed because of a storm,” Larsen said.
A spokeswoman for the Lolland-Falster Police confirmed to BT that they did not give permission to cross the bridge.
Speaking to local news outlet Fyens.dk, Larsen said that the vehicle carrying the Crown Prince broke an agreement.
“There was a request from the royal vehicle to be allowed to drive to the other side of the barriers so that it could be 10-20 metres ahead of the other vehicles. We allowed that because the agreement was that they would stop and wait until the bridge was reopened. But they simply drove over it,” Larsen told Fyens.dk.
Royal House: "It was the wrong decision"
A spokesperson for the Danish Royal House apologized on Crown Prince Frederik’s behalf.
“The crown prince is sorry about what happened and understands that the situation adds to the frustration and anger of those people who had to wait hours to cross the bridge,” Lene Balleby, the Royal House’s head of press, told broadcaster DR.
“It was the wrong decision to take the opportunity to cross the bridge,” she added.
According to Ritzau, PET also apologized for the bridge crossing and vowed to review its procedures.
"There is a difference between the royals and the rest of us"
Trine Villemann, an author who has written critically on the Danish Royal House, said the crown prince made an epic blunder.
“This is yet another episode in a long line of examples where the royals have simply shot themselves in the foot. Any royal house is built upon a foundation of respect from the people. That respect disappears when the Royal Family behaves in such a way,” she told Jyllands-Posten.
Leading opposition party Venstre, however, had no problem with the crown prince’s trip over the bridge.
“We should acknowledge that there is a difference between the royals and the rest of us,” party spokesman Karsten Nonbo told TV2 News.